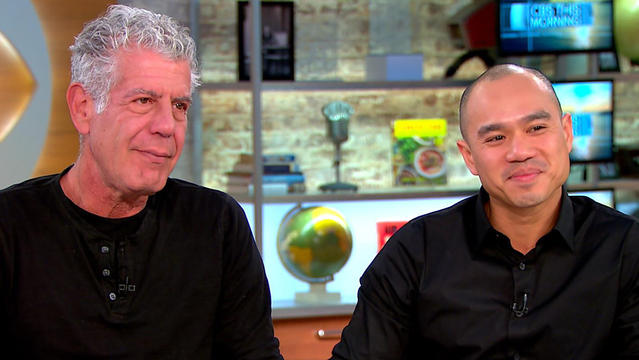 You've probably tasted Laotian flavors and not even realized it. Anthony Bourdain and chef James Syhabout want to change that. Syhabout is the force behind two Michelin-starred restaurants, Commis and sister eatery Hawker Fare, which focuses on the Laotian cuisine of his childhood. Bourdain is the host of the popular travel and food show "Parts Unknown." He calls Hawker Fare one of the most important restaurants he's ever visited.

After fleeing Laos once it fell to the Communists in 1975, Syhabout's family made their way to Oakland and his journey from refugee to culinary rock star began. Now, he's out with a new book published by Bourdain's imprint, called "Hawker Fare: Stories & Recipes from a Refugee Chef's Isan Thai & Lao Roots."

The pair joined "CBS This Morning" to discuss how Thai food as it's known in the U.S. has been borrowing from Laotian flavors for years, what sets the little-known cuisine apart from others, and why it's the kind of food that Bourdain says chefs increasingly crave.

"I think we've been eating a lot of Lao cuisine but in Thai restaurants. So much of the Thai food we love is, in fact, ethnically Laotian coming from Isan region. So we're familiar with at least a general outline of a lot of those flavors and a lot of those dishes and chances are already deeply love them," Bourdain said.

In the preface of the book, Bourdain writes that Syhabout has "done more than any other person in the world to get the word out about this unfairly, unnecessarily secret country and cuisine." For Syhabout, it's the details that make the flavors unique.

"The spice levels, the preservation of using fermented fish sauce that's unfiltered. It's not the clear fish sauce you typically see on the supermarket shelves and that's where the flavor bombs and that's what makes Laos food really separate and different," Syhabout said.

The first time the chef tried Thai food was actually at his mom's own restaurant. He said there wasn't even a "resemblance" between what they ate at home and what she served.

"What we used to cook for ourselves and what we serve on the menu, I was like, 'Mom, what's the deal here?'" he recalled.

Syhabout would go on to work in fine dining restaurants all over the world but eventually, wanted to go back to his roots.

"I need to pay homage to how I got started and it's kind of a shame that I didn't know how to cook this food I grew up on," he said.

For Bourdain, who's eaten in almost every corner of the world, it's the "spice and funk" that he says has captured the attention of fine dining chefs.

"Look, this is deeply, richly satisfying food with deep, interesting flavors and, interestingly, increasingly the kind of flavors that fine dining chefs crave after work," he said.

"What's exciting about this book and so many of the really great cookbooks and chef stories is that story of cultural identity you know who's – the history of the world as one chef told me is in this plate. It's telling a story, often a very personal one, a very old story. So to me this is very much a book about what it means to be American, who's cooking in America now, what is American food, all these things that we value and care about. A story of a struggle to find and reconnect with ethnic and cultural identity. These are really relevant questions given current times."