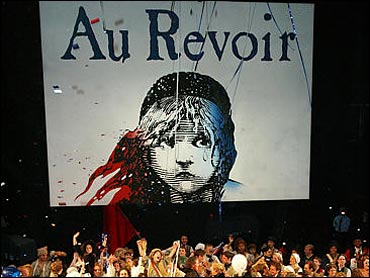 In a flurry of red, white and blue balloons, streamers and confetti, Broadway bid goodbye Sunday to "Les Miserables."

It was an emotional final performance for the musical, which closed after more than 16 years and 6,680 performances, second only to "Cats," Broadway's longest-running show.

Even before the show reached its stirring finale, the invitation-only audience was on its feet and cheering the performers. Cheers, screams and applause had started the moment the orchestra struck up the first notes of the musical based on Victor Hugo's epic novel, and they didn't stop for the entire evening.

"Time for au revoir," producer Cameron Mackintosh told the audience at the curtain call as he thanked the cast and "all the great, fantastic casts we've had before." The show's authors, Alain Boublil and Claude-Michel Schonberg, as well as its co-directors, Trevor Nunn and John Caird, stood beside him beaming.

After the curtain call and speeches, some 40 children who had appeared in recent high school productions of "Les Miserables" gave mini-reprises of the show's better-known songs. They were joined on stage by all the performers, including members of the original cast, for one last bow.

The show, which originally cost $4.5 million, opened March 12, 1987, and was a staggering box-office success, winning eight Tony Awards including best musical. Grosses for the New York production alone have totaled more than $410 million, and the musical is still out on the road with a tour that has been booked into 2004.

The English-language version of "Les Miserables," which tells the story of Jean Valjean and his pursuit by the relentless Inspector Javert, had its premiere in London at the Royal Shakespeare Company's Barbican Theatre in October 1985 and moved that December to the Palace Theatre, where it is still running.

Success has not been limited to New York and London. The musical has played around the world, from Asia to Australia to South America, grossing more than $1.8 billion worldwide.

With the decline in tourists after the Sept. 11 terrorist attacks, ticket sales for the New York show faltered. But the box office picked up last October when Mackintosh announced the closing, which was supposed to be March 15 but then was pushed back to May 18 because of a jump in business.

In the last several weeks, the musical has played to more than 90 percent capacity. The week before its final seven days in New York, "Les Miserables" grossed $853,505, filling nearly 96 percents of its seats.

In the last few years, the big British musicals have slowly been disappearing from Broadway. "Cats," the Andrew Lloyd Webber feline extravaganza, folded in 2000 after 18 years and 7,485 performances. "Miss Saigon," another Boublil-Schonberg show, closed in January 2001 after a 10-year run.

The only one left is "The Phantom of the Opera," another Lloyd Webber musical, which opened in January 1988. It is in third place on the Broadway long-run list with 6,382 performances as of Sunday.