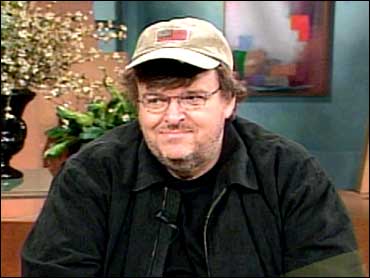 And while Democrats weren't the only ones on hand at this week's premiere in New York and the screenings in Washington and Oklahoma City, there was no question but that it was a hot ticket for those who would like to see someone else in the White House next year.

The movie is so political that Thursday, a conservative group asked federal election officials to investigate whether TV ads for the film violate campaign finance law regulating when commercials may feature a presidential candidate.

"Fahrenheit," which strongly criticizes President Bush and his administration's decisions surrounding the Sept. 11 attacks and the war in Iraq, has been criticized itself as deliberately slanted - a charge Moore denies.

Moviegoers are now getting the chance to make up their own minds, with early reactions ranging from "Very well done" to "Filled with lies and distortions" - the latter review from conservative commentator and convicted Watergate conspirator G. Gordon Liddy.

a Republican congressman who's in the movie
and complains that Moore, who did an ambush interview with him on the street, failed to include his answers.

Moore shows himself telling Minnesota Rep. Mark Kennedy that "We are trying to get members of Congress to get their kids to enlist in the army... and go over to Iraq."

Kennedy's got two nephews in the military - and says he told Moore that one was on the way to Afghanistan - a fact Kennedy says should have been included in the film.

In Oklahoma City Thursday night, hundreds of people lined up and paid $25 apiece for an advance look at the film, at a benefit for a political group which advocates on behalf of issues including healthcare reform, civil rights, environmental protection and gay rights.

Andrew Rice, of the Progressive Alliance Foundation, says Moore chose Oklahoma as an advance screening site because Oklahoma is perceived to be a safe state for Republicans.

"He (Moore) wanted to hear what Oklahoma City thought of it," said Rice, who met Moore while serving on a commission for families of the victims of 9/11. "He thinks it's good to have the film where it's not expected to be popular."

Rice, whose older brother, David Rice, was killed in the terrorist attacks on the World Trade Center, said half of the ticket sales will go to help military families who have lost a loved one in the war with Iraq.

Barry Gardner, 54, president of the Oklahoma City chapter of the Communications Workers of America, said Moore's choice to pre-screen his film in Oklahoma City is significant because Oklahoma City was the site of 1995 bombing of the Alfred P. Murrah Federal Building, which killed 168.

Gardner said he was at the pre-screening because he didn't know how long the movie would run in such a conservative area.

"I feared I would not get to view the film, not here in the Bible belt," said Gardner, who doesn't support Bush.

After seeing the two-hour movie, Gardner emerged from the theater overwhelmed, but resolved in his beliefs.

"It was fair," he said. "It showed Bush as Bush is and as Bush will be. It connected every dot for me."

Moore's film - which won the top award at the Cannes Film Festival - highlights President Bush's connection to oil and gas companies and raises questions about the Bush family's relationship with leaders in the Mideast.

Moviegoers booed lawmakers lampooned in the movie, cheered when Moore's name flashed across the screen and gave a standing ovation when the movie ended.

Viewers sucked in their breath as the sound of the planes crashing in the World Trade Center shook the theater, strikingly similar to the sound of the bomb crumbling Oklahoma City's federal building.

"The whole time you can't not relate back to what happened here in the Murrah bombing," said Billie Brown, a conservation organizer for the Sierra Club. "You just felt such empathy for what they were going through. We lost friends in the bombing in Oklahoma City, it's devastating to anyone."

In New York, and Washington, Moore was on hand personally - in D.C., going so far as to leave his omnipresent baseball cap at home and put on a suit and tie to mingle with a power crowd of lawmakers, stars, and other guests.

Among those walking the red carpet at the Washington screening was Democratic National Committee chairman Terry McAuliffe, who said he thought the film would play an important role in this election year.

"This movie raises a lot of the issues that Americans are talking about - that George Bush has been asleep at the switch since he's been president," said McAuliffe.

Also from the Democratic side of the aisle - Sen. Tom Harkin of Iowa - who implored all Americans to see the film: "It's important for the American people to understand what has gone on before, what led us to this point, and to see it sort of in its unvarnished presentation, which Michael Moore has done."

The two-hour film depicts President Bush as lazy and oblivious to warnings in the summer of 2001 that al Qaeda was poised to strike. It also accuses the administration of manipulating the Sept. 11 attacks and fanning terrorism fears to win support for the Iraq war.

Dozens of fans greeted Moore outside the theater with applause and shouts of "Go Michael!"

Moore, a fervent Bush critic, said he hopes the movie will get people to the ballot box in November.

"If this movie can inspire a few of that 50 percent that did not vote in this country to get back involved, to re-engage, then the movie will have accomplished something important," he said.

"This movie is slanted - it's a backlash at the president, taking the view that U.S. leadership is incompetent," said Miguel Brown, 22, a production assistant who did not work on the movie.

"Moore makes it look like U.S. soldiers in Iraq were thrown into battle straight off the streets. The American army is better than that," said Brown, who is the son of a military officer.

Tune in to Friday's CBS Early Show for an interview with Moore.