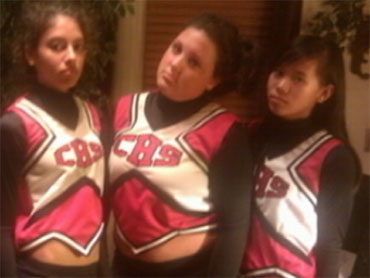 Some cheerleaders in Connecticut are stirring up quite a controversy over their outfits. They say they're uniforms are too skimpy and hurt their self esteem.

CBS News correspondent Bianca Solorzano on "The Early Show" Wednesday that in Bridgeport, Conn., teens are fighting to cover up.

Heidi Medina complained to school administrators about a uniform she says shows too much skin.

Heidi told CBS News, "I don't really want to show my stomach to people and it's not legal in competition for us to show our midriff."

Heidi and her teammates loved last year's uniform that was less revealing.

A recent poll of college cheerleaders, conducted by the University of South Carolina, showed the uniforms can have damaging effects. A third of those polled were at risk for eating disorders, especially among young women wearing midriff-baring uniforms.

Renee Zweig, director of Union Square Cognitive Therapy in New York, told CBS News, "This happens at a time when girls are particularly vulnerable. They are developing their identities, their bodies are changing, they are particularly impacted by peer pressure and social pressure."

Two girls on Bridgeport's team were so embarrassed they wore football jerseys to cover up during their first game. But Bridgeport public school officials say they don't condone inappropriate attire.

But for some girls, Solorzano said, the uniform controversy is a personal foul.

Ariana said, "I feel like if I go out, I feel trashy."

On "The Early Show," Dr. Jennifer Hartstein, a child and adolescent psychologist and "Early Show" contributor, said this is a great story of empowerment for these girls.

She said, "The fact is that they really went in to a group of adults -- teenagers and were eloquent and really spoke their minds on the fact this was not something they were willing to accept, 'What can we do to change it?' I think that's terrific and sends a great message for girls out there."

"Early Show" co-anchor Maggie Rodriguez added, "Such an important message in this day and age when we know that body image is affected by so many negative role models."

Hartstein said, "If you look what the girls are looking at and the media puts out to them, thin is the way to be, you are supposed to show your skin and be in skimpy outfits. It's discounting how good girls can feel in their own skin if they are wearing appropriate clothes. These girls may feel more comfortable and even cheer better, be better on the field they can feel comfortable in their uniforms."

Rodriguez remarked, "What is surprising the girls came forward and said i felt degraded, humiliated and embarrassed and there was pushback by administrators who said, 'These uniforms are fine, they're based on the sizes that you gave us, they're appropriate.' Isn't that surprising?"

Hartstein responded, "So surprising and made me so angry when I read that because I was thinking, these girls are standing up for what they are comfortable with. Why, are we as adults putting them down and blowing them off when we should be working to empower them and making them feel good. So I think it's so important and they did step up and say, 'Let's get new skirts and leotards for underneath.' So I think that's important -- some part got through -- so they're really respecting what the girls need."

"It shouldn't have taken so long," Rodriguez said.

Hartstein agreed and said the lesson is about feeling comfortable in your own skin.

"Body image and self-esteem are so linked together, we want to teach girls to feel comfortable in their own skin whatever way possible," she said.