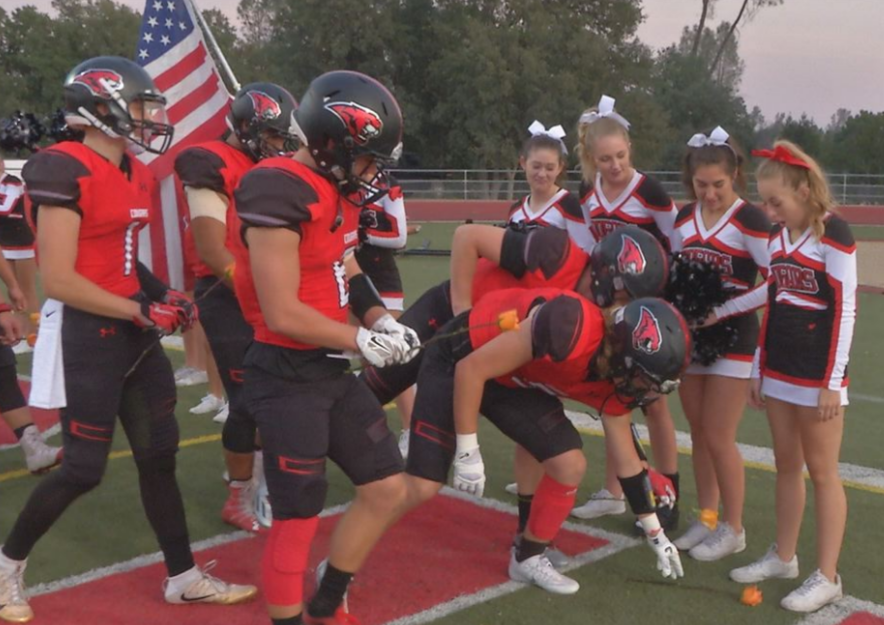 A high school cheerleader who was recently diagnosed with cancer was surprised with her own personal cheering section at last week’s football game.

One by one, Foothill High School football players from Palo Cedro, California, dropped off orange roses -- the color for leukemia awareness -- at Ashley Adamietz’s feet as they ran onto the field before their first game of the season.

Fans cheered, members of the band banged on drums and Adamietz covered her mouth with her hands in disbelief.

The senior cheerleader said on Twitter that she was “shocked, overwhelmed, and speechless” by the students’ sweet gesture.

“For me, I wasn’t surprised at all that that’s something my players would want to do,” Brown told CBS News. “We’ve always worked long at developing character.”

The team ends every practice with the word “family,” Brown noted.

So, when players heard about Adamietz’s diagnosis in late August, they decided to do something.

A senior captain approached Brown with an idea to acknowledge Adamietz at their first home game, and the coach instantly agreed, assuring the player, “This is a family matter; we have to take care of our family before we take care of ourselves.”

As a father, Brown said he couldn’t help but tear up as he watched his players deliver flowers to the girl.

“We had to check our emotions,” he said. “To see our players do something like that for one of our own -- we were proud coaches, proud fathers and proud fans that night.”

The football team will continue to support Adamietz’s fight against cancer by wearing orange ribbons on the back of their helmets. Fans and students are also being encouraged to wear orange to the games.

As a video of the gesture continues to circulate on social media, Brown hopes the rest of the world will see that you can learn valuable life lessons through sports.

“Our players are learning how a simple act of kindness can really impact millions,” he said.