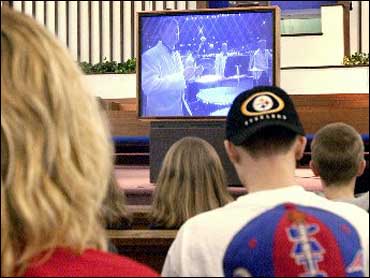 There is a place for worship, and a place for football. On Super Bowl Sunday, the Broadfording Brethren Bible Church is both.

For the third consecutive year, the Rev. R. William Wyand will replace his pulpit with a big-screen TV and invite people to watch the game from the padded pews. A potluck buffet opens when the pre-game service ends.

The goal is fellowship, or "coming together as the body of Christ," Wyand said.

"I truly believe Christians can have a wonderful time together without violating our biblical standards and principles," he said.

Certainly, faith and sport are not strangers. The virtues of physical fitness and fair play are a part of religious beliefs, and many top athletes credit their success in part to spiritual devotion.

The Souper Bowl of Caring, a South Carolina-based anti-hunger group, collects donations outside churches on Super Bowl Sundays. The Fellowship of Christian Athletes sells a Super Bowl party kit that includes NFL stars' videotaped testimonials to be played during halftime.

"I just don't think that's appropriate," said the Rev. Bobby Cain of the First Baptist Church of Hitchcock, Texas. Although his church held a Super Bowl party with a halftime service in its gymnasium under another pastor in 2001, Cain dislikes even seeing food in the sanctuary.

"When I was a kid, you didn't even talk out loud in the church before service. You came and you were quiet. It seems we've lost that in a lot of our churches, a reverence that used to be," he said.

Wyand, 37, a die-hard Washington Redskins fan, argues that church members live in the world, not apart from it. The carpeted sanctuary also is open for cheerleading practice and drama rehearsals by students at Broadfording Christian Academy, a school affiliated with the independent, 175-member church.

"We try to treat our buildings with respect, but these are just buildings," Wyand said. "Basically, from our standpoint, the church is made up of people."

That's why Wyand, troubled by a 30 percent to 50 percent drop in attendance at the regular evening service on Super Bowl Sundays, brought the game into the church.

"To me, it was an advantage to see the Super Bowl and praise the Lord at the same time," said Robert Jackson, 60, a car dealership personnel manager. "This is one way the church can reach out and help people come to the understanding that this does not need to be a competition between God and materialistic things of the world."

Still, it's not a typical Super Bowl party. There's no alcohol, and Wyand keeps one hand on the remote to switch channels or mute objectionable material. Last year, he turned off the halftime entertainment, led by U2, and said he'll probably veto this year's show, featuring Shania Twain, too.

There's no preaching during the game, but Wyand plans a pre-game talk on Christian teamwork. He also hopes to use dramatic developments on the field as life lessons for his four sons, ages 2 through 12, while keeping his own emotions in check.

"It's very easy for me to portray to them through my passion that I love football more than I love God," he said. "It's a challenge."

Mark A. Chaves, a University of Arizona sociologist specializing in the sociology of religion, said the parties show that churchgoers don't leave their secular interests and influences at the church door.

"We sometimes think of churches as kind of transcending the culture that people live in, as being set apart from the world, and this is a really good example of how embedded churches are, in general, in the culture that we live in," he said.
By DAVID DISHNEAU