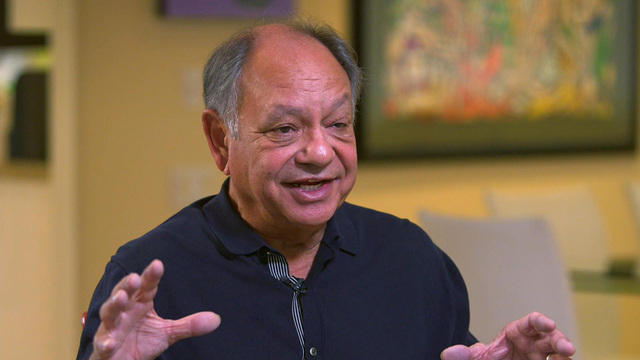 Cheech and Chong made their mark as one of comedy’s most influential pairs. The two performers starred in a string of popular movies and albums that defined “stoner comedy.”

Now Richard “Cheech” Marin is out with a new memoir called “Cheech is Not My Real Name... But Don’t Call Me Chong!”

Coming up in the 1970s, the now 70-year-old comedy icon admits he enjoyed his share of sex, drugs and rock ‘n’ roll. Marin takes us back to the roots of his pot-smoking persona, when he was growing up in east Los Angeles.

“I was a teacher’s worst nightmare. I was a straight-A student who was a wise-ass. And they’d go, ‘Shut up!’” Marin recalled, chuckling.

But Marin seemed an unlikely candidate to become film’s most famous pothead.

He smoked his first joint as a freshman in college, he said.

“My dad was a policeman, LAPD, 30 years, and I got that line growing up: ‘Marijuana, don’t you ever try marijuana or I’ll end your short little life right now!’” Marin told CBS News’ Anthony Mason. “After I smoked my first joint, I kind of, ‘Wow, what else have they been lyin’ about?’”

It was the late 1960s. Marin joined anti-war protests, dropped out of college and moved to Canada to dodge the draft. That’s where he met his future costar – and it changed his life.

“You met Tommy Chong. Basically, you met him in a strip club?” Mason asked.

“It was Vancouver’s first topless bar and he owned it,” Marin said.

He joined Chong’s hippie burlesque show, and before long, a comedy team was born.

“Why did it work?” Mason asked.

“I think because we were exactly opposite of each other,” Marin said. “Those two characters played off each other. Basically, it was comedy jazz. We knew how to play that.”

“That was the purpose,” Marin said.

With their first film, “Up in Smoke,” in 1978, they found an even wider audience.

“We were extremely sophisticated under guise of being these dummies,” Marin said.

They’d make eight movies together, all directed by Chong. But Marin said as their success grew, so did Chong’s ego.

“It affects your personality, especially being a director, because you’re God,” Marin said. “He was the creative genius, and I was the actor and I was lucky to be there – uh, I don’t think so.”

In 1987, Marin broke away with “Born in East L.A.,” his film about a Mexican-American who’s mistakenly deported.

“It kind of ended up being your Declaration of Independence?” Mason asked.

“Oh, absolutely it was,” Marin said.

“Kicked off the rest of my life,” Marin said.

His career went on to include six years with Don Johnson in the CBS series “Nash Bridges” and a resume packed with roles in animated movies. That success has allowed him to indulge a passion for art, especially the work of the Mexican-American artists of the Chicano Art Movement.

“My mantra has been that you can’t love or hate Chicano art unless you see it,” Marin said.

His collection, now some 700 pieces, is considered the finest in private hands in the country.

In 2008, after more than two decades apart, Cheech and Chong finally reunited.

“Did the fact you ultimately found your own identity make it easier to go back to the other one?” Mason asked.

“Yeah, it did. You’re the first one that’s identified it – that. But yeah, I did,” Marin said. “We came to the conclusion we don’t have to love or hate each other, which we do both. And it’s just, we have a business.”

Their business is growing, perhaps in part due to the growing legalization of pot in recent years.

“I remember one time we were doing this big show in Detroit,” Marin recounted, “and drunk white guys in suits were trying to get on the stage. Like how this has really changed!”