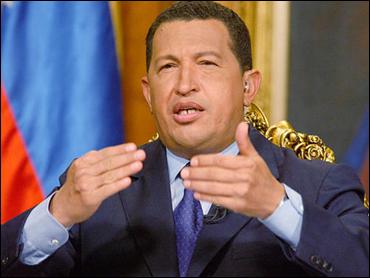 Venezuelan president Hugo Chavez said he would not offer amnesty to thousands of oil workers fired for leading a two-month strike against him and urged prosecutors to indict them for sabotage.

More than 9,000 workers have been dismissed from state oil company Petroleos de Venezuela S.A. since a national strike began Dec. 2 to force Chavez to step down or agree to early elections.

Opposition leaders agreed to lift the strike in all areas except oil last week.

"There is no rehiring. They are not just fired, they must be indicted," Chavez said Sunday, calling on the attorney general and judges to administer justice. "Punishment for those responsible for all the damage they have done to PDVSA and the country!"

Chavez said Venezuela's penal code allows for jail terms of up to five years for those convicted of damaging strategic installations such as ports, oil pipelines and refineries. He said many striking workers had not only abandoned their posts but also sabotaged oil operations.

Dissident executives from PDVSA deny sabotage charges. They say replacement workers hired by the government lack qualifications and are incompetent, hence delays in restarting the industry.

The opposition has held several marches supporting the fired oil workers and also says it collected 2.5 million signatures of support.

The government claims most of PDVSA's 40,000 employees have returned to work. Strike leaders deny this, saying thousands refuse to return to their posts until Chavez rehires the 9,000 fired and agrees to an early vote on his rule. Another 900 were fired over the weekend, local daily El Universal said Sunday.

Chavez on Sunday called the oil strikers "petro-terrorists" who had teamed up with other opposition forces — business groups, labor unions and political parties that called the strike — to try to oust him.

The strike cost Venezuela more than $4 billion, the government estimates. It was lifted to protect many businesses from bankruptcy, opposition leaders said.

Chavez also threatened to use newly imposed exchange controls in an offensive against his opponents. The controls were imposed last week to shore up the weak bolivar currency and slow capital flight. The bolivar was fixed at 1,600 per dollar and a currency administration office was set up to distribute dollars.

Chavez has to restrict the ability to trade bolivars for dollars in order to support the currency peg. If capital flees the country, it will be nearly impossible for Venezuela to keep the Bolivar at its pegged exchange rate.

For months, Venezuela has struggled to maintain a pegged rate to the dollar, only to spend millions of its reserves propping up the bolivar. It recently allowed the currency to float, or be determined by the market, before announcing the peg.

A stable exchange rate is desirable because it makes it easier for businesses to plan, lowers the risk for foreign investors, and stabilizes the cost of repaying foreign debt.

Critics say the controls are Chavez's latest attempt to restrict freedom in Venezuela. They fear dollars will only be available to government sympathizers and not to the opposition.

They also mirror the crisis in nearby Argentina, which faced civil unrest over the government's lengthy shut-down of teller windows and cash machines during the deepest times of crisis last year. The International Monetary Fund has criticized Argentina for that move.

Peace talks between government and opposition are being mediated by the Organization of American States. Two possible solutions were suggested by Nobel Peace Prize winner Jimmy Carter but have not yet been agreed on.

The opposition favors cutting Chavez's term in power and calling early elections while government negotiators say they will only discuss a possible referendum on Chavez's rule after August.

The opposition also maintains that any agreement must also allow the reinstatement of the fired PDVSA workers.

Chavez, a former paratrooper, was first elected in 1998 and re-elected in 2000. He promised to wipe out the corruption of previous governments and redistribute the country's vast oil wealth to the poor majority.

His critics charge he has mismanaged the economy, tried to grab authoritarian powers and split the country along class lines with his fiery rhetoric.