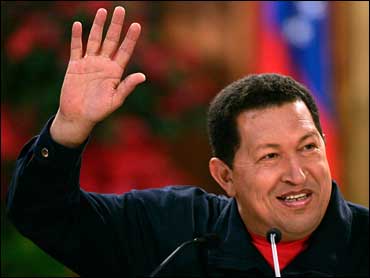 President Hugo Chavez faces his stiffest challenge in years Sunday as voters decide whether to approve constitutional changes that would greatly expand his powers and let him seek re-election for decades to come.

An emboldened opposition and recent violent clashes in street protests point to a potentially volatile dispute if the vote is close. Chavez has warned opponents he will not tolerate attempts to stir up violence, and threatened to cut off oil exports to the U.S. if Washington interferes.

"In the case of an aggression by the United States government, we wouldn't send any more oil to that country," Chavez told reporters Saturday. "Forget about our oil."

Chavez calls the constitutional overhaul vital to making Venezuela a socialist state, and labels those who resist it pawns of U.S. President George W. Bush.

"Anyone who votes 'No' is voting for George W. Bush," Chavez shouted to a sea of supporters Friday. "Our true enemy is the U.S. empire, and on Sunday, Dec. 2, we're going to give another knockout to Bush."

While the Venezuelan government touts polls showing Chavez ahead, other surveys cited by the opposition indicate strong resistance - which would be a change for a leader who easily won re-election last year with 63 percent of the vote.

Pollster Luis Vicente Leon said tracking polls by his firm Datanalisis in the past week show the vote is too close to predict. Which side wins will depend largely on turnout among Chavez's supporters and opponents, he said.

"If he wins by a very small margin, that's a scenario filled with conflict," Leon said. "In a country where there are high levels of mistrust between the camps, it's obvious the opposition ... would think it was fraud."

The opposition has called for close monitoring of the results, raising tensions ahead of a vote on changes that would extend presidential terms from six to seven years, create new forms of communal property, and let Chavez seek re-election in 2012 and beyond.

Chavez accused his opponents of plotting to discredit the legitimate results of what he says will be a "knockout" at the polls, saying his enemies enjoy support from Washington.

The U.S. remains the No. 1 buyer of Venezuelan oil, and the South American country is a major supplier to the United States. Chavez has repeatedly warned that any attempts to "destabilize" his government could trigger a halt in oil shipments.

In Washington, State Department spokesman Sean McCormack said the United States hopes the referendum will be "a free and fair contest in which the will and desire of the Venezuelan people is reflected."

The Venezuelan Embassy in Washington protested McCormack's remarks, saying they "are aimed at generating doubts" ahead of the vote. In a statement, the embassy said it wants to "alert the international community about actions that some undemocratic sectors could undertake by failing to concede the final results of the referendum."

Opposition leader Manuel Rosales, the governor of Zulia state, recalled before a crowd of supporters Friday night that he conceded defeat in the 2006 presidential race - and urged Chavez to do the same and "recognize the will of the people."

Some 140,000 soldiers and reservists were to be posted to maintain security during the vote, the Defense Ministry said.

Tensions have risen in recent weeks as university students have led protests and at times clashed with police and Chavista groups. One man was shot dead Monday while trying to get through a road blocked by protesters.

About 100 electoral observers from 39 countries in Latin America, Europe and the United States are on hand, plus hundreds of Venezuelan observers, the National Electoral Council said. Absent this time are the Organization of American States and the European Union, which have monitored past votes.

Chavez, who has become Latin America's most outspoken antagonist of Washington since he was elected in 1998, has sought to capitalize on his personal popularity ahead of the vote. He is seen by many supporters as a champion of the poor who has redistributed more oil wealth than any other leader in memory.

The changes would grant Chavez direct control over the Central Bank, allow his government to detain citizens without charge during a state of emergency, and empower the president to redraw the country's political map and handpick provincial and municipal leaders.

Many Chavez supporters say Chavez needs more time in office to consolidate his unique brand of "21st century socialism," and they praise other proposed changes such as shortening the workday from eight hours to six, creating a social security fund for millions of informal laborers and promoting communal councils where residents decide how to spend government funds.

In one working class Caracas neighborhood last month, the communal council chose recipients for 15 government loans of $465 each for projects like home repairs, said Maritza Milano, 32, a dental hygienist who said it meant a lot to her needy neighbors. "It's the micro-government that we have inside our community," she said.

Chavez denies he is trying to amass power, saying the changes are necessary to move toward a socialist system.

The former lieutenant colonel, now 53, says he will stay in power only as long as Venezuelans keep re-electing him - and adds that might be for life.

"If God gives me life and help," Chavez told supporters Friday, "I will be at the head of the government until 2050!" - when he would be 95 years old.