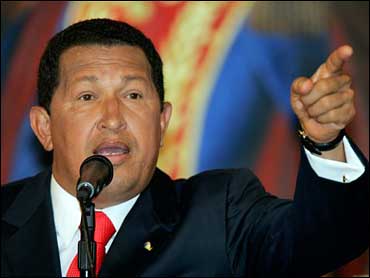 Venezuelan authorities have foiled a plot for a sniper attack on the opposition's leading presidential candidate ahead of this Sunday's election, President Hugo Chavez said Thursday.

Chavez said a group of "fascist" radicals had been plotting to use a rifle with a telescopic sight to shoot at Manuel Rosales during a speech in order to blame it on Chavez's government in an attempt to derail the vote.

"It was to say that Chavez sent them to kill him, and generate chaos," Chavez said during a news conference. Chavez said authorities had seized the weapon from an armored car.

"Fortunately, our intelligence services have improved enormously and we have neutralized many plans by crazy people," Chavez said, without giving details.

Chavez also called Rosales a liar and urged his enemies to respect the result of Sunday's vote, saying an upset would be impossible.

"There are two options here — ours and that of the U.S. empire and its flunkeys here, who were the ones who staged the coup," Chavez said, referring to the two-day putsch of 2002, when Chavez was returned to power by street protests and loyalists in the military.

Chavez spoke to reporters on the final day of campaigning, a day after Rosales urged the government to stick to the rules in the vote and said his supporters would be on alert.

"It has to be a clean game ... If that happens, all of us will be calm," Rosales, a political veteran who is governor of Zulia state, told The Associated Press shortly before closing his campaign with a rally of hundreds of thousands in Maracaibo, Venezuela's second-largest city.

At his news conference, Chavez accused Rosales of lying about signing a document supporting the short-lived coup.

"Everyone saw the ex-governor here in this room signing the coup proclamation. So he's said no, that what he signed was an attendance sheet," Chavez said.

"What nerve! And a gentleman like that wants to be president!" Chavez said, adding, "A liar cannot be president of a country, much less of Venezuela."

Rosales has called the vote a choice between democracy and an increasingly authoritarian Cuba-style system.

Chavez insisted that his proposal for constitutional changes to do away with presidential term limits "is not a dictatorship, it's democracy." He noted that presidents of France have served long periods in power.

Venezuela has become increasingly polarized along class lines, with the wealthier supporting Rosales, the poor backing Chavez and a fractured middle class.

Shoppers are packing supermarkets to stock up on supplies, fearful that Sunday's outcome could prompt street protests and violence.

Both Rosales and Chavez have warned their supporters to be alert for fraud and to be ready to defend the vote.

The exchange of warnings came as a top lawmaker from Chavez's ruling party, Iris Varela, called on government supporters to stage peaceful protests outside private TV stations if they report that Rosales is leading. She said pro-opposition media may use rigged exit polls to falsely show a Rosales advantage, and reporting on such polls is outlawed under electoral law.

Rosales ended his campaign before hundreds of thousands dancing to the pulse of reggaeton music who packed a dozen blocks in Maracaibo. He has managed to unite Venezuela's opposition movement for the first time since a crushing defeat in a 2004 recall referendum against Chavez.

"This is not just any election. We're not deciding on a president," Rosales told the crowd. "We're going to choose between two paths — one side that believes in democracy ... and the other that wants to establish in Venezuela a Castro-Cuban communist system that strips the people of freedom."

Rosales supporters cite polls showing Sunday's race will be tight, although an independent AP-Ipsos survey and other recent polls found Chavez with a large lead.