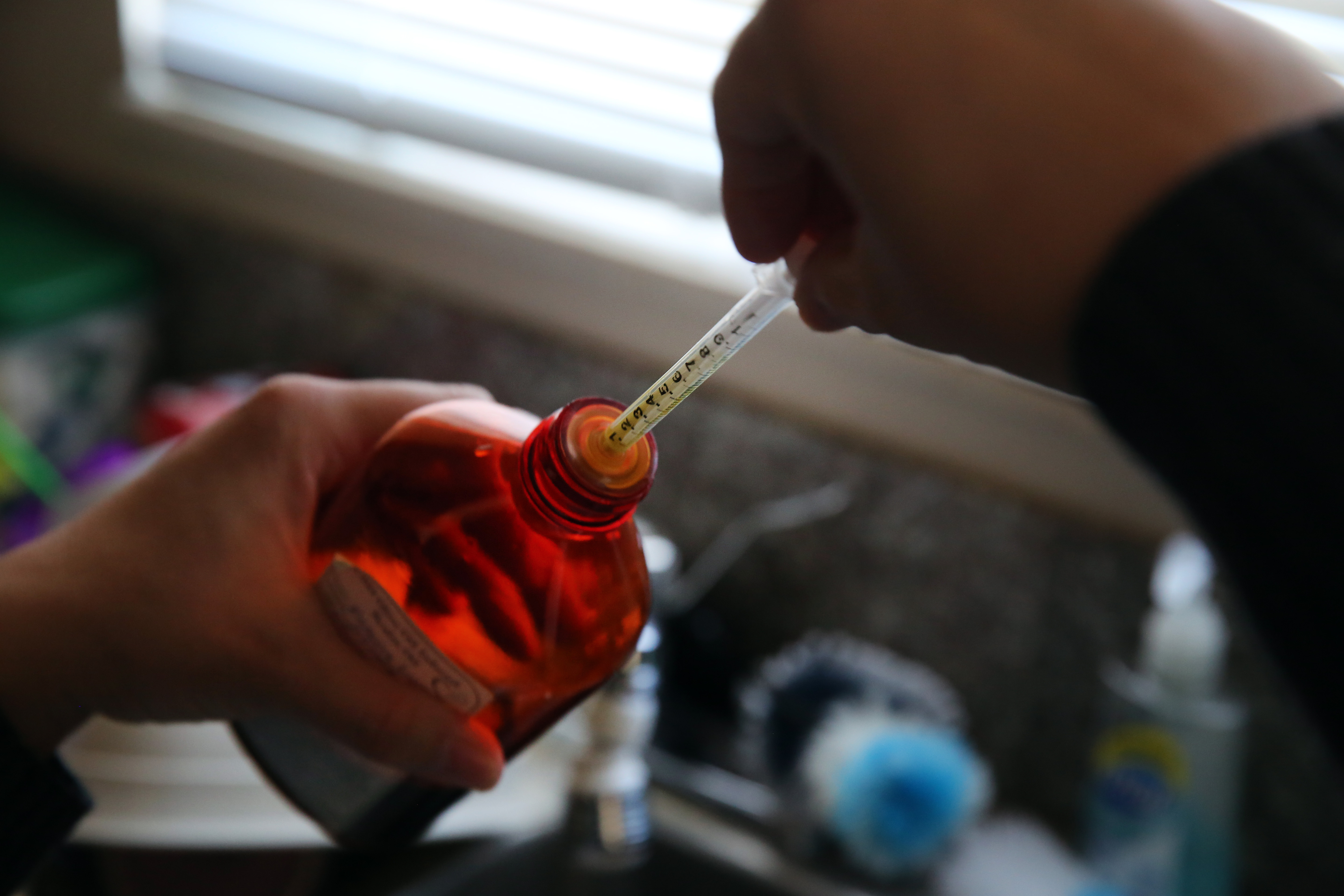 COLORADO SPRINGS, Colo. -- Parents are flocking to Colorado with their sick children to find “Charlotte’s Web,” a strain of marijuana thought to treat debilitating seizure disorders.

The strain was named for 5-year-old Charlotte Figi, who had been suffering from a rare disorder called Dravet’s syndrome, which caused her to have as many as 300 grand mal seizures a week.

Charlotte used a wheelchair, went into repeated cardiac arrest and could barely speak, but doctors were out of ideas for help. Then as a last resort, her mother began calling medical marijuana shops.

Two years later, Charlotte is largely seizure-free and able to walk, talk and feed herself after taking oil infused with a special pot strain. Her recovery inspired the Charlotte's Web name for the marijuana strain she takes in oil form that is bred not to have THC -- the ingredient that make users high.

Her story also spread on social media, and inspired an influx of families with seizure-stricken children to Colorado from states that ban the drug.

"She can walk, talk; she ate chili in the car," her mother, Paige Figi, said as her dark-haired daughter strolled through a cavernous greenhouse full of marijuana plants that will later be broken down into their anti-seizure components and mixed with olive oil so patients can consume them. "So I'll fight for whoever wants this."

The family of 20-month-old Maggie Selmeski moved from Tennessee to Colorado last November seeking Charlotte’s Web. Her mom, Rachel, told CBS News' Teri Okita that her daughter would suffer up to 500 seizures a day, and epilepsy medication did not help. However, Charlotte’s Web has reduced the seizures drastically, she said.

“I can watch people's face as I tell them we're giving her cannabis oil, and it's like ... a little questioning,” she said.

Doctors warn there is no proof that Charlotte's Web is effective, or even safe.

In the frenzy to find the drug, there have been reports of non-authorized suppliers offering bogus strains of Charlotte's Web. In one case, a doctor said, parents were told they could replicate the strain by cooking marijuana in butter. Their child went into heavy seizures.

Scientist Dr. Margaret Haney, director of the Marijuana Research Laboratory at Columbia University in New York -- one of a handful of U.S. labs that perform government-funded studies on marijuana -- told CBS News that she is “uncomfortable” with the absence of evidence that Charlotte’s Web treats seizures, despite parents clinging to the hope it does.

"I have heard of this and have deep empathy for the desperation of parents with ill children," Haney said. "Cannabis is not the world’s most dangerous drug by any stretch but that does not mean it is without potential long-term cognitive and psychiatric consequence, especially when it comes to exposure to children.”

She added, "The best thing we can do for these patients and their parents is prove this potential medication works."

The lack of scientific evidence hasn’t stopped more than 100 families from relocating to Colorado since Charlotte's story first began spreading last summer, according to Figi and her husband and the five brothers who grow the drug and sell it at cost through a nonprofit. The relocated families have formed a close-knit group in Colorado Springs, the town where the dispensary selling the drug is located. They meet for lunch, support sessions and hikes.

"It's the most hope lots of us have ever had," said Holli Brown, whose 9-year-old daughter, Sydni, began speaking in sentences and laughing since moving to Colorado from Kansas City and taking the marijuana strain.

Amy Brooks-Kayal, vice president of the American Epilepsy Society, warned that a few miraculous stories may not mean anything -- epileptic seizures come and go for no apparent reason -- and scientists do not know what sort of damage Charlotte's Web could be doing to young brains.

"Until we have that information, as physicians, we can't follow our first creed, which is do no harm," she said, suggesting that parents relocate so their children can get treated at one of the nation's 28 top-tier pediatric epilepsy centers rather than move to Colorado.

However, the society urges more study of pot's possibilities. The families using Charlotte's Web, as well as the brothers who grow it, say they want the drug rigorously tested, and their efforts to ensure its purity have won them praise from skeptics like Wolk.

For many, Charlotte's story was something they couldn't ignore.

Charlotte is a twin, but her sister, Chase, doesn't have Dravet's syndrome, which kills kids before they reach adulthood.
In early 2012, it seemed Charlotte would be added to that grim roster: Her vital signs flat-lined three times, leading her parents to begin preparing for her death. They even signed an order for doctors not to take heroic measures to save her life again should she go into cardiac arrest.
Her father, Matt, a former Green Beret who took a job as a contractor working in Afghanistan, started looking online for ways to help his daughter and thought they should give pot a try. But there was a danger: The psychoactive ingredient, THC, can trigger seizures.
The plant also contains another chemical known as cannabidiol (CBD) that may have seizure-fighting properties. In October, the Food and Drug Administration approved testing a British pharmaceutical firm's marijuana-derived drug that is CBD-based and has all its THC removed.
Few dispensaries stock CBD-heavy weed that doesn't get you high. Then Paige Figi found Joel Stanley, who along with four of his brothers, had found themselves in the medical marijuana business after moving to Colorado. Almost as an experiment, they bred a low-THC, high-CBD plant after hearing it could fight tumors.
Stanley went to the Figis' house with reservations about giving pot to a child.
"But she had done her homework," Stanley said of Paige Figi. "She wasn't a pot activist or a hippy, just a conservative mom."
Now, Stanley and his brothers provide the marijuana to nearly 300 patients and have a waitlist of 2,000.
The CBD is extracted by a chemist who once worked for drug giant Pfizer, mixed with olive oil so it can be ingested through the mouth or the feeding tube that many sufferers from childhood epilepsy use, then sent to a third-party lab to test its purity.
Charlotte takes the medication twice a day. "A year ago, she could only say one word," her father said. "Now she says complete sentences."
The recovery of Charlotte and other kids has inspired the Figis and others to travel the country, pushing for medical marijuana laws or statutes that would allow high-CBD, low-THC pot strains.
Donald Burger recently urged a New York state legislative panel to legalize medical marijuana while his wife, Aileen, was in the family's new rental house in Colorado Springs, giving Charlotte's Web to their daughter Elizabeth, 4. The family only relocated to Colorado after neurologists told them Elizabeth's best hope -- brain surgery -- could only stop some of her seizures.
"It's a very big strain being away from the rest of our family," Aileen Burger said recently while waiting for her husband to return from a trip to sell their Long Island house. "But she doesn't have to have pieces of her brain removed."
Ray Mirazabegian, an optician in Glendale, Calif., brought Charlotte's Web to his state, where medical marijuana is legal. He convinced the Stanley brothers to give him some seeds he could use to treat his 9-year-old daughter Emily, who spent her days slumped on the couch. Now, she's running, jumping and talking. Mirazabegian is cloning the Charlotte's Web seeds and has opened the California branch of the Stanleys' foundation.
Mirazabegian has begun to distribute the strain to 25 families and has a waitlist of 400. It includes, he said, families willing to move from Japan and the Philippines.

Consumer Reports: Salmonella found in a third of ground chicken
Thanks for reading CBS NEWS.
Create your free account or log in
for more features.
View CBS News In
CBS News App Open
Chrome Safari Continue
Be the first to know
Get browser notifications for breaking news, live events, and exclusive reporting.