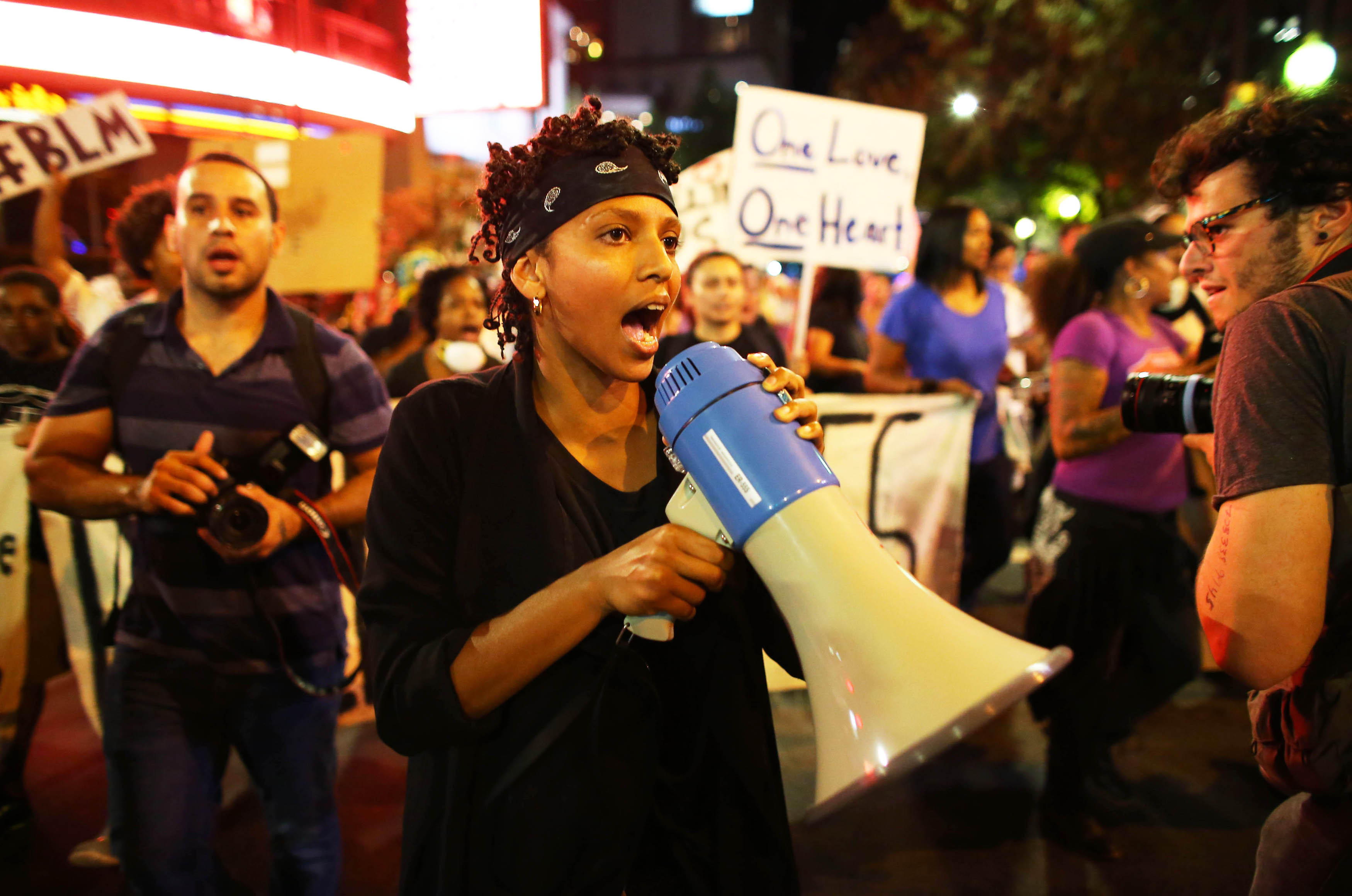 Protesters gathered in Charlotte Friday for the fourth night of demonstrations following the family’s release of the video of the shooting death of Keith Lamont Scott.

Several dozen people gathered at a park and then marched through Charlotte’s business district with signs, the Associated Press reported.

One marcher had a sign that said “Just Stop The Killing,” while another had a banner that said “Just Release the Tapes.” Protesters have sought the release of police footage of the shooting earlier this week of Keith Lamont Scott by a police officer.

They were watched by National Guard members posted in front of many downtown buildings.

Scott’s family on Friday released a two-and-a-half minute video of the shooting, which CBS News has not authenticated. The video does not indicate whether Scott had a gun. Police have said he was armed, but witnesses say he held only a book.

Scott’s wife, Rakeyia Scott, tells officers that he has a TBI, or traumatic brain injury. At one point, she tells her husband to get out of the car so police don’t break the windows. She also tells him, “don’t do it,” but it’s not clear exactly what she means.

As the encounter escalates, she repeatedly urges police, “You better not shoot him.”

After the gunshots, Scott can be seen lying face-down on the ground while his wife says “he better live.” She continues recording and asks if an ambulance has been called. The officers stand over Scott. It’s unclear if they are checking him for weapons or attempting to give first aid.

The video shows an object on the ground near Scott’s body. When we zoomed in for further analysis, it appears to be a glove, CBS News correspondent David Begnaud reports.

In the footage, Scott’s wife states the address and says, “These are the police officers that shot my husband.”

Charles G. Monnett, one of the attorneys for Scott’s family, said the cellphone video was released “in the name of truth and transparency” and urged the police department and the city to release their video.

“The family is still hopeful that the Charlotte-Mecklenburg Police Department and city of Charlotte will release all available video of the incident to the public so that people can draw their own conclusions about Keith’s death,” Monnett said in a statement. “We encourage everyone to reserve judgment until all the facts are known.  This is simply one step in our quest to find the truth for this family.”

Also among the National Guard troops and Charlotte-Mecklenburg police officers patrolling the downtown streets was a Greensboro church choir literally sounding a call for peace.

A choir from the Citadel Church in Greensboro took over a street corner and began two hours of singing spirituals Friday night, drawing a crowd of clergy and curious onlookers who were moved enough by the songs to clap along.

The Rev. Gregory Drumwright directed the choir of approximately two dozen. He says the church membership is made up mostly of students from colleges in the Greensboro area, about 70 miles northeast of Charlotte.

Drumwright and his parishioners were dressed in white. He said that was because they wanted to be lights and “vessels of peace, vessels of righteousness, not rage.”

Democratic nominee Hillary Clinton’s campaign announced Friday that it would be postponing a trip to Charlotte initially planned for Sunday until Oct. 2nd. The city’s mayor, Jennifer Roberts, on CNN earlier Friday asked that both presidential candidates be aware of Charlotte’s “very stressed resources for security.”

A hotel in uptown Charlotte, where the protests are taking place, is moving guests to other hotels, CBS affiliate WBTV reported. An employee at Aloft at EpiCentre told WBTV the hotel is moving guests from the hotel in an effort to “comply with CMPD,” adding that the safety of their guests is important.

The employee said the hotel wants to “protect our community.”

The EpiCentre, where the hotel is located, announced Friday that it was adjusting its hours to accommodate with the curfew that is currently underway in the city.

Meanwhile, hundreds of people marched in downtown Atlanta to protest Scott’s shooting, along with the police shooting of Terence Crutcher in Tulsa, the Associated Press reported.

At Friday’s demonstration, marchers took to the streets after a rally at the National Center for Civil and Human Rights museum Friday evening. Many held signs reading “Black Lives Matter” and chanted “We’re ready, we’re ready for y’all.”

NAACP state President Francys Johnson and lawyer Mawuli Mel Davis led the protest. No police were present, but volunteers walked ahead of demonstrators and blocked off intersections for marchers.

The peaceful march in Atlanta comes after 43-year-old Keith Lamont Scott was fatally shot by an officer in Charlotte this week. In Oklahoma, 40-year-old Terence Crutcher was shot to death by Tulsa Officer Betty Shelby.

Shelby is charged with first-degree manslaughter.