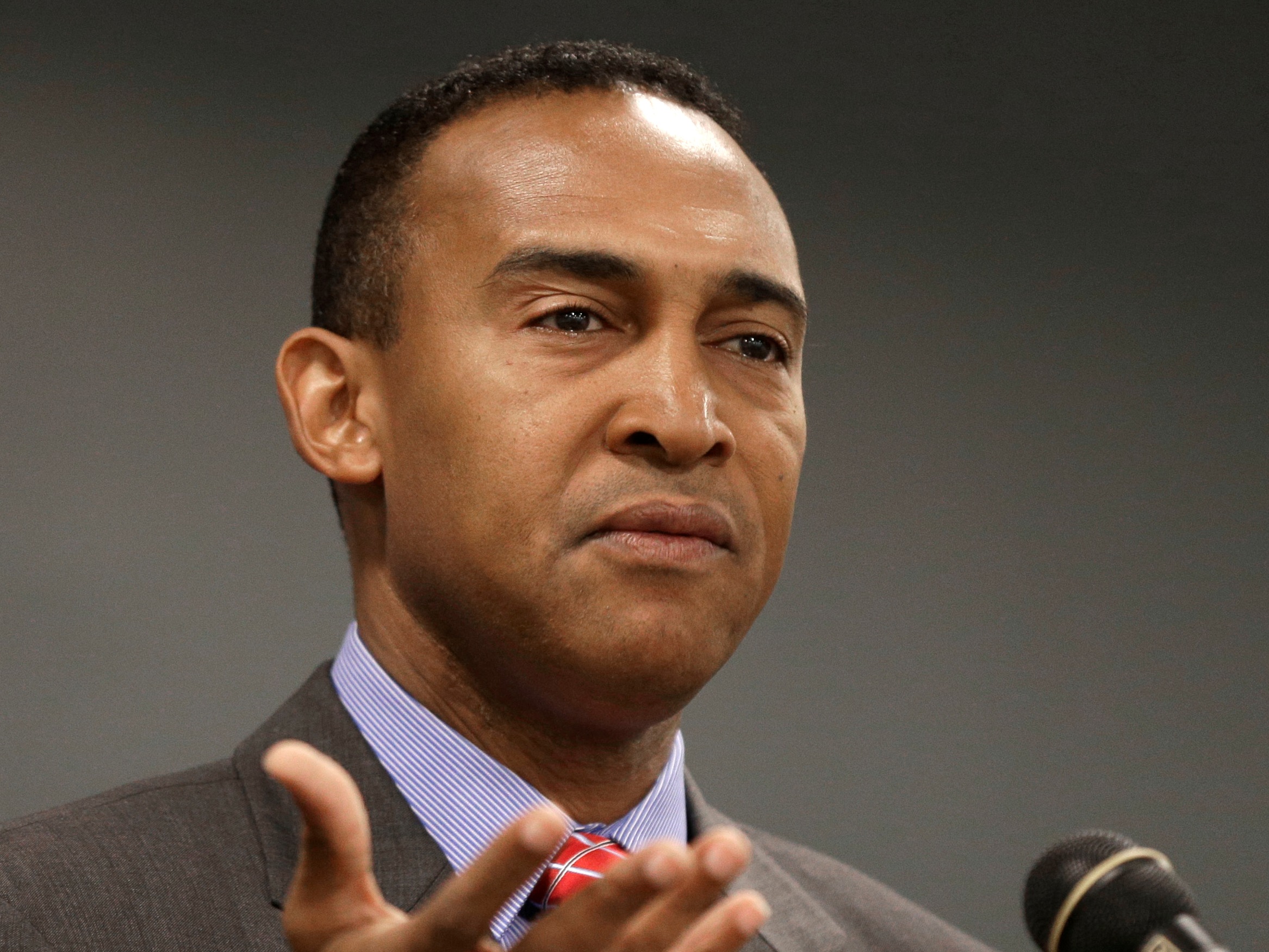 CHARLOTTE, N.C. -- The mayor of North Carolina's largest city resigned on Wednesday after his arrest on public corruption charges.

U.S. Attorney Anne Tompkins said Wednesday that Charlotte Mayor Patrick Cannon is facing theft and bribery charges.
Tompkins says Cannon solicited and accepted bribes from undercover FBI agents posing as real estate developers who wanted to do business in Charlotte. According to the criminal complaint, Cannon is accused of accepting bribes from the agents on five separate occasions. On the most recent occasion, on February 21,2014, Cannon allegedly accepted $20,000 in cash in the mayor's office.

He is also accused of accepting from the undercover agents over $48,000 in cash, airline tickets, a hotel room, and use of a luxury apartment between January 2013 and February 2014 in exchange for the use of his official position.

Cannon says in the letter that the pending charges will create too much of a distraction for the business of the city to go forward.

If convicted on all the charges, he faces 20 years in prison and more than $1 million in fines.
The 47-year-old Cannon, a longtime radio show host and the founder of E-Z parking, a parking management company, was elected mayor in November, replacing Anthony Foxx.

Telephone messages left for Cannon were not immediately returned.

The investigation began in August 2010, when Cannon still held an at-large seat on the Charlotte City Council. He was first elected to the council in 1993 at age 26, becoming the youngest council member in the city's history.

When he was 5, his father was found dead of a gunshot wound outside a vacant school. He was raised by his mother, Carmen, who worked on a truck assembly line. They lived in housing projects.

After graduating from South Mecklenburg High, he earned a degree in communications with a minor in marketing from historically black North Carolina A&T State University in Greensboro.

"I am both saddened and angered because I have known Patrick and his family for over 30 years, but more than anything, my heart is broken for the city of Charlotte," said Republican Gov. Pat McCrory, a former Charlotte mayor. "This is not the city that I know, served and love. This alleged behavior is inexcusable and cannot be tolerated."

According to the complaint, Cannon was also accused of accepting $12,500 from an undercover agent to help him develop a feminine hygiene product called "Hers" to be marketed and sold in the United States. In exchange, Cannon offered to help the agent - posing as a business manager for a venture capital company - get the necessary permits to open a nightclub.

During the meeting, an undercover agent told Cannon: "You know, again whatever you can do to get our application moved up towards the top, uh, business license and things like that, that we need."

According to the complaint, Cannon responded: "Yeah, not a problem."

Cannon later had a discussion with the undercover agent, apparently attempting to clarify that the money was strictly seed money for the "Hers" product and not payment for his help in opening the nightclub.

"OK, so I mean, 'cause I'm not, I'm not one of those Chicago or Detroit type (of) folk," Cannon told the agent, apparently referring to high-profile corruption cases in those cities.

Cannon ended the conversation by saying he looked good "in an orange necktie, but not an orange suit," according to the complaint.

When the agent set up two later meetings to discuss the money and give Cannon an opportunity to return it, Cannon failed to show up, the complaint said.

During his campaign, Cannon promoted plans to create jobs in a city of 760,000 people that has become one of the nation's leading banking and energy centers.

Big banks helped drive Charlotte's explosive growth over the past two decades, but the city's financial institutions were hurt in the nation's banking meltdown. Since 2008, Charlotte has lost thousands of good-paying financial services jobs.

Two days after Cannon announced he was running for mayor in May 2013, the first undercover agent introduced him to a second undercover agent posing as a developer from Las Vegas. The second agent told Cannon he was interested in developments along a streetcar and light rail line being built in Charlotte. Cannon provided the proposed routes and stops, according to the complaint.

Cannon later agreed to fly to Las Vegas to convince a group of potential foreign investors to invest in the company purportedly owned by the second agent. Even though the two had known each other only about a month, Cannon agreed to tell the investors he had known the agent for years. The complaint said Cannon acknowledged the story he would tell investors was false, saying, "Well, if it's made up, it really doesn't matter."

Cannon and the second agent also discussed compensating Cannon for his part in the scheme, and Cannon suggested that he receive a campaign donation before he made the trip to Las Vegas.

Instead, the agent agreed to pay for Cannon's trip to Las Vegas, plus $6,000 cash for spending money for his wife. The Cannons received the first $1,000 when they arrived in Las Vegas; they received the other $5,000 after Cannon gave his presentation to the purported investors.