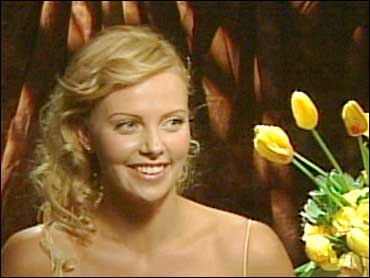 Early Show Anchor Bryant Gumbel talks to Charlize Theron about her latest role in The Cider House Rules, the cinematic adaptation of the John Irving novel by the same title.

The Cider House Rules tells the tale of an orphan who grows up in an orphanage, raised by the doctor who runs it. As a young adult, he decides to leave and discover what the world has to offer.

"It's such a classic tale of discovering life," Theron offers.

Though perhaps classic in some ways, the movie deals with some challenging subjects, abortion and incest. Did that scare Theron?

"No becauseÂ…I have a little bit more faith in the audience," she says. "I think a little controversy is good."

"I think that people realize that you can't just make movies with mundane titles and themes and just have people go and have a good time," Theron declares.

"Sometimes people actually want to go see something that relates to society, even though this is a period piece and it takes place in World War II in the '40s," she says.

"It's so similar to what we still experience today. And it's great to see how we have evolved and we have come a long way with some of those issues," Theron points out.

"Other ones we just kind of haven't really come that far," she adds.

Theron was not daunted by the fact that her character Candy is so flawed. "I think perfect people are boring," she declares. "I donÂ't relate to them when I see them on-screen."

"I think it's nice to find something that the writer and the filmmaker and the people who are actually involved have no fear to play the character as honest[ly] as possible," Theron says.

"They don't walk around constantly for the 60 days or 50 days that you're shooting: 'How do we make her likeable, how do we make this character sympathetic so the audience just love[s] her,'" she explains.

"She was so honest that the things that she experienced in the movie, when...you think of...how to bring that across [on the] screen, they are so flawed and so bad in a sense," Theron says.

"Then you realize, once you start doing it, that it's so human," she offers. "That all his characters are so human, which makes them flawed."

When asked why she wanted to be involved in this project, Theron exlains, "I read the book maybe 10 years ago. And five years ago they were trying to make it into a film."

Theron heard through the grapevine about attempts to turn the book into a movie. "I tried to follow it," she says.

She met with the director of that time, she says. "Then the movie just fell through. Nothing happened to it for five years."

"I have kind of followed it for so long that eventually when...[director] Lasse Hallstrom got it, being a huge fan of his work,...I just really went after it," she says.

Theron has done about eight films in a little more than three years and is working on yet another. When asked why she drives herself so hard, she confronts her interviewer: "Why do you wake up so early to do this show every morning?"

"I don't think of it that way," she says, about tallying up her workload. "When that becomes an issue, when I start knowing the minutes and the hours, I guess that's when I'll stop. But I just love every moment of it so much."

"I love what I do. I really, really do," she says about her job.