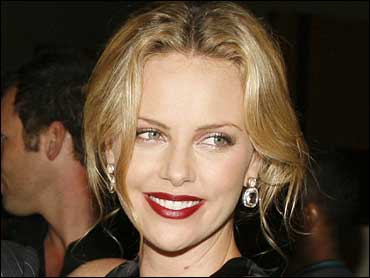 She was born in South Africa, but Oscar-winning actress Charlize Theron is happy to finally be a U.S. citizen.

"You're stuck with me now," she told David Letterman on CBS' "The Late Show" Wednesday.

Theron, who was sworn in with more than 5,000 other new citizens last May, said the process wasn't easy.

"Well, I've always wanted to be (a citizen) they just didn't want to take me. It's quite a process you have to work hard, you know, study up," she said. "Then finally I was approved and you have to go in and do an interview. You have to know your stuff."

Letterman wanted to know what kind of questions Theron was asked in the interview.

"It really is what you should know and it's good that they do it," she said. "You gotta know your senators, how the government works ... "

"Nobody knows how the government works, for God's sake," Letterman quipped.

The actress said she did "incredibly well" after studying really hard, but that she was thrown off when she was asked to write the simple sentence, "It's a sunny day."

"It's one of those weird feelings when you completely doubt yourself," she said, "and you're like 'does sunny have a double n?'"

Born Aug. 7, 1975, Theron was a ballet dancer and appeared with New York's Joffrey Ballet before a knee injury ended her dance career.

She headed for Los Angeles and an acting career, making her mark playing Aileen Wuornos in "Monster," the dark, true story of a prostitute who became a serial killer. She won an Academy Award, a SAG award and a Golden Globe award in 2004 for the role.

Theron is promoting her latest film, "Sleepwalking," a drama about a dysfunctional family. She produced and acted in the film.

"It's not a grim, depressing story," she said. "It's very real but at the same time it tells us that the end of the day we are all responsible to take charge of the life we really want."