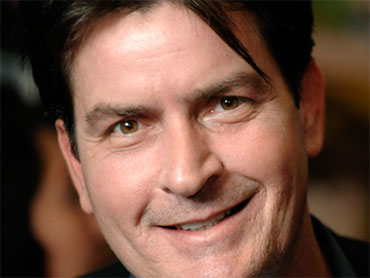 As part of a plea deal, the "Two and a Half Men" star pleaded guilty Monday to a misdemeanor third-degree assault charge;  in exchange, the prosecution dropped two other more serious charges, including a felony charge of menacing.

The "menace" was only sentenced to 30 days in a rehabilitation center, 30 days of probation and 36 hours of anger management; however, it is not certain Sheen will have to spend 30 days in rehab because he has already spent 93 days at Promises Treatment Center in California this year.

Sheen's attorney, Yale Galanter, says the time already spent at the rehab facility could count towards the current  sentence.

The charges stemmed from a domestic dispute that occurred between Sheen and his wife, in which he allegedly threatened to kill her and brandished a knife after she told him she wanted a divorce.

Gloria Allred, who represented Sheen's ex-girlfriend in a previous domestic assault charge against the actor, was not at all pleased with the sentence.

Although Allred believes the sentence is too light, prosecutors in Colorado say it is not unheard of to drop a felony charge in similar cases or have a defendant sentenced to rehabilitation instead of jail time.

It also helped that Sheen and Mueller have since reconciled and that she wanted prosecutors to drop the felony charges.

At the conclusion of the proceedings,  Sheen thanked the court and people of Pitkin County.

"I look forward to complying with the court's decision, getting on with my life and putting this behind me."

Complete coverage of the Charlie Sheen case on Crimesider.