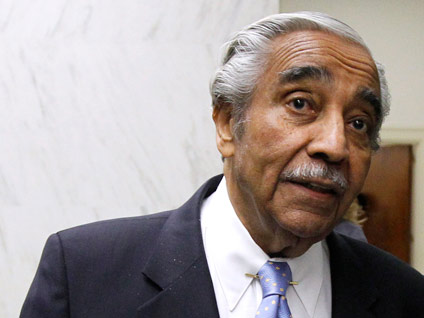 Veteran Rep. Charles Rangel has been censured by the House of Representatives despite a last-minute plea for leniency from the 80-year-old Harlem Democrat.

The vote to censure was 333-79, with 170 Democrats voting for censure. Two Republicans voted against the motion.

Rangel said the vote was "painful" to accept and suggested it was grounded in politics despite the overwhelming vote to censure.

"Compared to where I've been, I haven't had a bad day since," he added in his brief comments, which prompted applause from some House members. He later called the vote to censure "very, very, very political."

Rangel made the statement following the public reading of the censure resolution by House speaker Nancy Pelosi. It was a a humiliating moment for the onetime chairman of the influential Ways and Means Committee, who stood in the chamber stone-faced as a dour Pelosi read the resolution.

Rangel apologized to lawmakers before the Thursday afternoon vote, evoking his military service in calling for his punishment to be reduced to a written reprimand. He said while he says there is "no excuse" for his failure to obey rules, he believes "this body has to be guided by fairness."

"Never in the history of this great country has anyone suffered a censure when the record is abundantly clear that...the committee found no evidence at all of corruption," he said.

Rangel is the 23rd member of the House to face censure, the most serious punishment a member can face short of expulsion. It was the first House censure in nearly three decades.

Before the vote on censure, members voted down an amendment from Democratic Rep. G.K. Butterfield that would have downgraded his punishment to a reprimand (which would mean no public rebuke) 146-267. Several Democrats, along with Republican Rep. Peter King, came out publicly before the vote to say Rangel did not deserve censure.

"I have found no case where charges similar or analogous to those against Congressman Rangel resulted in censure --- a penalty thusfar reserved for such serious violations as supporting armed insurrection against the United States and the sexual abuse of minors," King said in a statement.

It was not enough to win over House members, however, who were acting after the House ethics committee recommended that course of action. Ethics committee chair Rep. Zoe Lofgren said the recommendation was consistent with Democrats' efforts to run the most open and ethical Congress in history.

Incoming Republican House Speaker John Boehner said in a statement on the censure that "This is a sad day for the House of Representatives, and a reminder of the work we have ahead of us to repair the shattered bonds of trust between the people and their government."

Rangel, who acknowledged "serious mistakes" in his comments before the vote, was censured for a range of violations, among them submitting misleading annual disclosures of his income and assets, the improper use of a subsidized New York apartment, and improperly using official resources to raise funds from businesses and foundations for a center named after him at the City College of New York.

He was found guilty by the ethics panel on 11 of 13 charges by an ethics committee that noted that his errors on paying taxes came despite the fact that he ran the Ways and Means committee, which writes tax law.

Rangel said before the vote that while he brought his troubles onto himself, he made honest mistakes and felt he had been treated unfairly. He said that he wants "to continue to serve this congress and this country and do what I can to make life better for other people, and I think we all agree that in 40 years, I tried my darnedest to do that."

Rangel, who was reelected overwhelmingly in November despite his ethics troubles, also reminded colleagues that he was wounded in the Korean war and won a Purple Heart.

At a press conference following the censure, Rangel said, "at long last, this 2-year nightmare is over."

The last House censure came in 1983, when two members were censured for sexual relations with teenage pages.