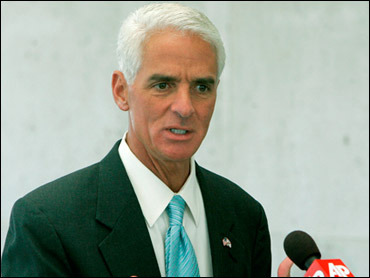 Florida Gov. Charlie Crist's Senate campaign this morning canceled its television advertising in a few markets, according to reports, in yet another sign the governor may be rethinking his bid for the Republican Senate nomination.

Crist's campaign is reportedly pulling ads in the Orlando, Pensacola and Tampa Bay markets that were scheduled to run through April 25.

"We don't comment on campaign tactics but like any campaign our television buy is constantly being adjusted and shifted," campaign spokeswoman Andrea Saul told the St. Petersburg Times.

Orlando-based television station WFTV confirmed to Politico that the ads were canceled.

"I'm getting the official confirmation of when they'll go down, but he has pulled away from this week. That's not common practice," a national sales manager for the station reportedly said.

Crist has for weeks now fended off speculation that he will run for the Senate as an independent. Rubio, the former State House speaker, has built strong momentum with support of the Tea Party and other conservative elements of the GOP and now leads Crist in GOP primary polls.

However, recent polls suggest Crist could beat Rubio and Democratic candidate, Rep. Kendrick Meek, if he ran as an independent. Meanwhile, the governor recently vetoed an education reform bill widely supported by Republicans, showing his willingness to break from the party.

Crist has until April 30 to decide whether to run as an independent or stick with the GOP.

"I have every reason to believe that Charlie Crist is running as a Republican and this independent thing will not happen," he said.