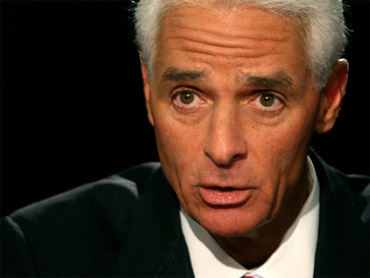 Crist's campaign had used the song - without permission - in an ad posted to Crist's website and on YouTube against Republican Marco Rubio, who would go on to win the Senate seat.

Now, as part of a settlement, Crist has apologized in the rather dour video at left. In it, Crist says that "Mr. Byrne has never permitted his songs to be used for advertizing of any kind, a position I respect deeply."

"The use of David Byrne's song and his voice in my campaign advertisement without his permission was wrong, and should not have occurred," Crist says, staring straight at the camera.

"I sincerely apologize to David Byrne for using his famous song and his unique voice in my campaign advertisement without his position," he adds. Crist goes on to pledge that he will get permission or a license for copyrighted work he wants to use in any future campaigns.

Byrne, the former Talking Heads singer, said in a statement reported by the Associated Press that the unauthorized use of copyrighted songs is "pretty rampant."

"Other artists may actually have the anger but not want to take the time and risk the legal bills," said Byrne. "I am lucky that I can do that. Anyway, my hope is that by standing up to this practice maybe it can be made to be a less common option, or better yet an option that is never taken in the future."

There was no word on terms of the settlement.