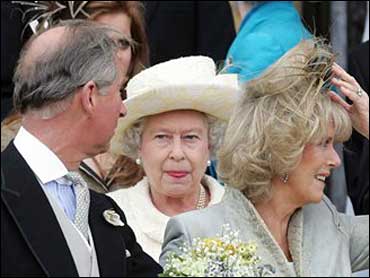 Prince Charles and Camilla Parker Bowles married Saturday at the 17th century Guildhall in the royal town of Windsor, capping a decades-long romance that survived scrutiny, scandal and the prince's first marriage to Princess Diana.

Emerging arm-and-arm from the ceremony, the couple waved to the cheering crowd — but there was no public kiss or embrace.

The couple went later to St. George's Chapel where the Archbishop of Canterbury Rowan Williams led a blessing ceremony, followed by a reception given by the queen.

The blessing included the couple and the congregation confessing "manifold sins and wickedness" — words from the Book of Common Prayer. They later pledged to be faithful in their marriage.

The blessing ceremony was attended by the Queen Elizabeth II and about 800 guests, including Prime Minister Tony Blair and the bride's ex-husband, Andrew Parker Bowles, who also attended the civil wedding.

Camilla takes on Diana's previous status as Princess of Wales but she plans to defer to public sentiment by avoiding using the title and will instead be known as the Duchess of Cornwall.

The bride wore an oyster-colored silk coat with a herringbone stitch, a matching chiffon dress and a straw, lace and feathered hat. For the blessing ceremony, she changed into a long, porcelain-blue silk dress and a gold-leafed feather headdress. She carried a small, simple floral bouquet bound with silk from her dress.

CBS News Correspondent Mark Phillips reports that Camilla was never going to enter a "glamour-off" with the late Princess Diana, Charles' first wife. But the ensemble was well received, even if she looked uncomfortable with all the cameras clicking.

"Camilla looked completely terrified," royals watcher Ingrid Seward told Tracy Smith on The Saturday Early Show. "She had told friends beforehand that she was dreading all the photographers. She was dreading that moment when she'd have to pose for pictures. Actually, she didn't pose for pictures. She had a quick joke with Prince William and then dived into the car really quickly."

Instead of the military uniform he wore at his first wedding, Charles was in formal morning wear, and the simplicity of the wedding stood in contrast to the pomp and grandeur of the first royal nuptials in St. Paul's Cathedral in London.

Jasmine and Lily of the Valley — known to symbolize the return of happiness — lined the hall where the civil ceremony took place.

After the reception at the castle, the pair left for their honeymoon at a Scottish hunting lodge that had belonged to the prince's grandmother. The couple was driven in a car adorned with red, white and blue balloons. Scrawled on the windshield was "Prince and Duchess." The back window read: "Just married." The front had "C&C."

"I think it's fantastic that it's ... formalized and recognized," said Verity Lee, 30, wearing a tiara and holding a placard with Charles and Camilla's images. "They deserve to be happy."

Nearly eight years after Diana's death, some have bridled at accepting Parker Bowles as a future queen, seeing her relationship with Charles as the reason his first marriage fell apart.

Diana fans stood outside her former London home. About 15 decked the gates with flowers and pictures of the princess.

The wedding represents a break in tradition for the fifty-something divorcees who were married in a civil ceremony the queen did not attend.

Lining the streets of this handsome old town buffed to a royal luster for the wedding, the crowds waited in chilly sunshine for the nuptials, postponed a day for the pope's funeral.

"It's up to him who he marries," said Barbara Murray, 41, who camped out in this royal hub overnight with her two daughters to stake out a vantage point to see the couple. "Whoever he chose wouldn't be the same as Diana."

Security was tight with snipers on rooftops, plainclothes officers moving around in the crowd, sniffer dogs and police armed with handguns watching over streets around Windsor Castle.

Police detained two people, including a smiling streaker who broke away from the crowd. Another was also detained for causing a public disturbance.

Thames Valley Police, responsible outside the castle, had 550 officers on duty and Scotland Yard, which is in charge inside the castle had dozens, including sharpshooters.

Inside Windsor Castle's gates, tents were erected for the world's media which had descended upon the township, while every vantage point, from private balconies to the roof of a local liquor store, was converted into temporary broadcast location.

Hotels were fully booked, and souvenir shops were doing a brisk trade in royal wedding mugs and tea towels.

Charles met Camilla Shand more than 30 years ago discovering a shared love of rural life. But he sailed off with the Royal Navy without cementing their relationship; in his absence she married Andrew Parker Bowles, who is expected to attend the ceremony.

The young princess won the nation's heart, but she didn't hold her husband's. Charles acknowledged years later that he had broken his marriage vows after the marriage had broken down and despite his and Diana's efforts to save it.

"There were three of us in that marriage," Diana said later — but she admitted affairs of her own.

Charles' and Camilla's marriages both collapsed — she was divorced in 1995, he in 1996. Andrew Parker Bowles remarried in 1996, and was on the guest list for Saturday's religious ceremony.

After Diana's death in 1997, Charles and Camilla cautiously began making their relationship public. Their first public appearance together came in 1999; the first public kiss in 2001. In February, the prince and Parker Bowles announced that they would wed.