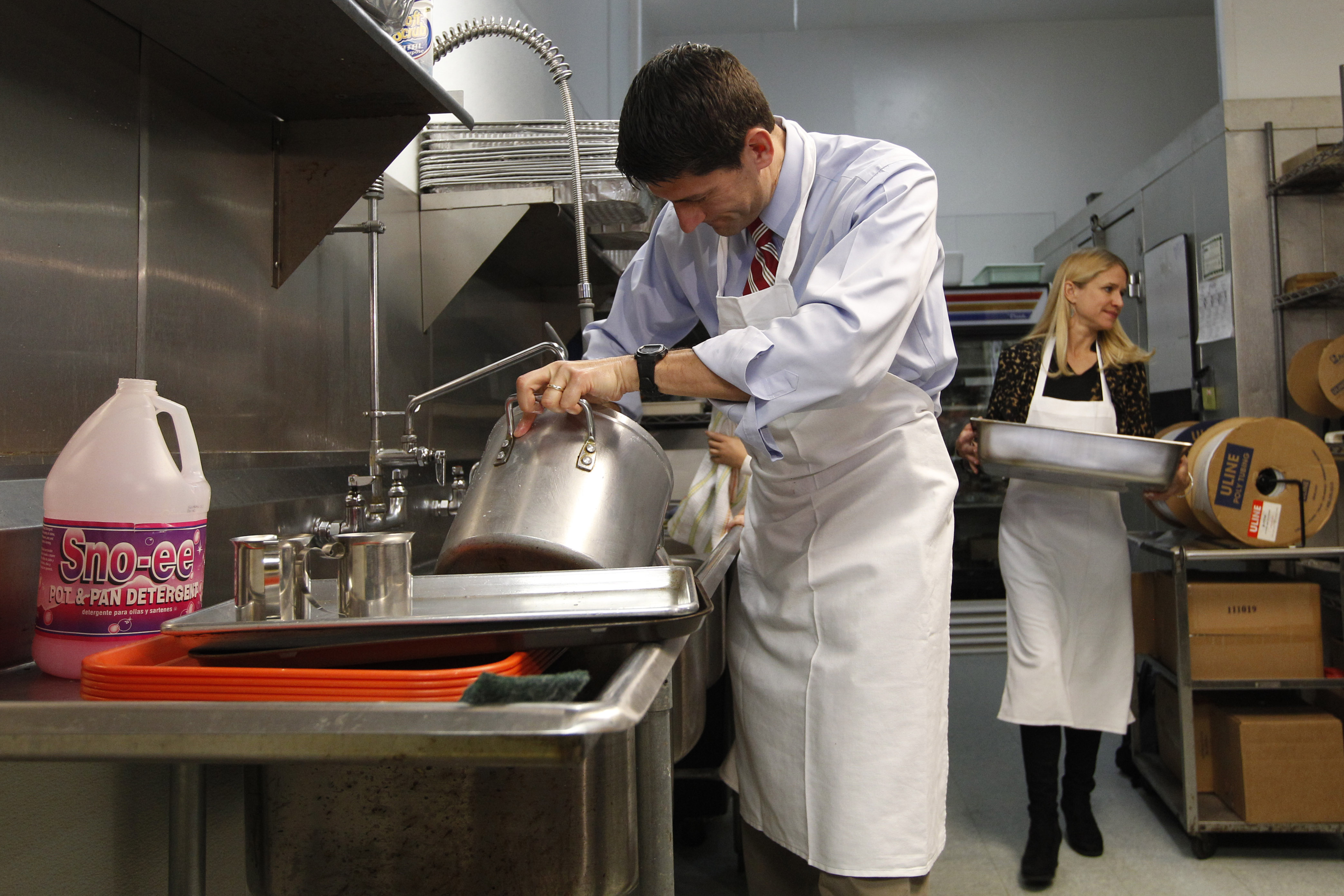 The head of a charity in northeastern Ohio where Republican vice presidential nominee Paul Ryan and his family were photographed cleaning dishes over the weekend said Monday that Ryan was not authorized to be on the premises and "did nothing" while there.

Brian J. Antal, president of the Mahoning County St. Vincent De Paul Society in Youngstown, told the Washington Post that the Romney campaign had not asked to make the Saturday visit to the soup kitchen. He said that he runs an apolitical faith-based organization which has bylaws barring it from hosting political candidates, and that the visit jeopardized donations from private individuals.

"They showed up there and they did not have permission," he said. "They got one of the volunteers to open up the doors." Antag added that Ryan and his family "did nothing" while on the premises.

"He just came in here to get his picture taken at the dining hall," he said.

Ryan was photographed cleaning "large metal pans that did not appear to be dirty" during a 15-minute visit, the Post previously reported. While television cameras rolled and photographers snapped pictures, the Wisconsin congressman discussed washing dishes while he was younger. He said he would get calluses on his fingers due to the heat from the industrial machine. You can see the video at left.

When Ryan arrived on the site in the early afternoon, the kitchen was clean and the dining area was empty, according to a pool report. After his time in the kitchen Ryan spoke to homeless people outside the soup kitchen, but reporters were kept from monitoring the conversation.

The Romney campaign said the visit was designed to highlight the work of soup kitchen volunteers. As the video above shows, Ryan greeted five or six adults volunteers and two children before going back to the kitchen.

UPDATE: The Vinidicator, in Youngstown, reports that according to Juanita Sherba, the coordinator who gave Ryan permission to come to the soup kitchen, Ryan did wash dirty dishes while he was there. The newspaper reports that Ryan's staff asked volunteers "to leave some pots and pans unwashed so the VP nominee and his family could do something when he arrived."

"We had to save dishes," she said. "We would have gone home by the time he arrived. We didn't need him to do the dishes. It was getting late, and I said that we were closing in five minutes. I waited longer than that, and he finally arrived."

Sherba expressed regret that she had allowed the visit to take place.

"It was the phoniest piece of baloney I've ever been associated with," she said. "In hindsight, I would have never let him in the door."

Brian Antal, meanwhile, has rescinded his claim from Monday that Ryan did not clean any dirty dishes. He told NBC News he had been erroneously told that was the case by a volunteer. The Washington Post reported Tuesday that Antal has voted in Democratic primaries since at least 1995.