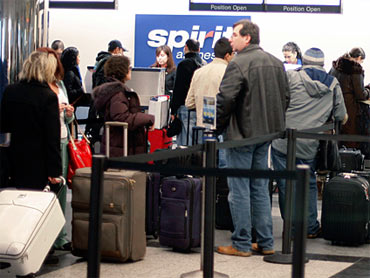 For passengers it's one more gripe at the airport.

Ever since last year, nearly all carriers charged between $15 and $175 for checked bags.

This August, Spirit Airlines will become the first carrier to charge for carry on luggage. By charging for carry-ons, Spirit's goal is getting people on and off the plane faster.

If you have a carry-on that will fit under your seat, it's still free. Anything bigger will cost passengers an extra $30.

There are some exceptions: Diaper bags, canes and strollers.

But a hatbox would mean laying out money.

"I would not take it," Spirit passenger Karen Portal said. "I would put it on my head. I'd be very upset."

Baggage fees have become big business for airlines: From $464 million in total revenues in 2007 to almost $2 billion, just in the first nine months of 2009.

To avoid charges, one in four passengers now checks zero bags. Down from one in six two years ago. That's led to a 24 percent drop worldwide in lost bags -- but a rise in heavier carry-on bags.

Other carriers are watching Spirit, which plans to lower ticket prices to offset the carry-on baggage charge.

"Airlines will always need more money," said Erik Torkells of Tripadvisor.com. "They will look for anything that can monetize. Whether it is more blankets or seat selections… or using the lavatory."