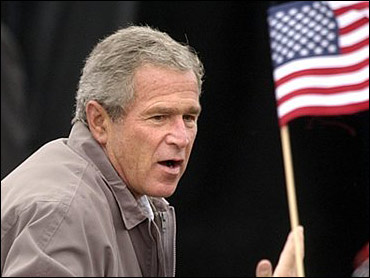 Pressing their attacks two days before their final campaign debate, President Bush criticized Sen. John Kerry on Monday for suggesting that terrorism should be reduced to "a nuisance," while Kerry charged the president's energy policy has "run out of gas."

Mr. Bush jumped on his Democratic rival for remarks Kerry made in an interview in The New York Times Magazine on Sunday, where Kerry said, "We have to get back to the place we were, where terrorists are not the focus of our lives but they're a nuisance."

"I couldn't disagree more," Mr. Bush responded Monday during a campaign stop in Hobbs, New Mexico. "Our goal is not to reduce terror to some acceptable level of nuisance. Our goal is to defeat terror by staying on the offensive, destroying terrorist networks and spreading freedom and liberty around the world."

The Bush campaign is also criticizing Kerry's comment in a new television ad.

Phil Singer, a Kerry-Edwards spokesman, said the Republicans misrepresented Kerry's full comments, which promised to reduce the terror threat so it does't threaten lives every day while continuing the battle.

"Considering that George Bush doesn't think we can win the war on terror, let Osama bin Laden escape and rushed into Iraq with no plan to win the peace, it's no surprise that his campaign is distorting every word John Kerry has ever said," the spokesman said.

On another topic, Mr. Bush accused Kerry of a "shift in the wind" on a Bush-backed forest law that is important to many in this wildfire-prone region.

Legislation signed by Mr. Bush last year makes it easier for timber companies to cut wood from national forests. The president argues that thinning forests will help prevent the devastating wildfires that hit the West nearly every summer.

"My opponent was against it. Now, he says he likes parts of the law," he said. "I guess it's not only the wildfires that shift in the wind."

Kerry was also campaigning in New Mexico, a swing state won by Democrat Al Gore by just 366 votes in 2000 and expected to be tight again this year.

At a town hall meeting in Santa Fe, Kerry sought to tap into unhappiness about higher prices at the gasoline pump. He charged that President Bush has done more to help energy companies boost their profits than to help consumers with soaring energy costs.

"When it comes to developing a real energy policy, George Bush has run out of gas," Kerry said. "The money that you're paying at the pump is going directly from your wallets straight into the hands of the oil companies and the oil producers."

Setting the stage for his third and final face-to-face meeting with Mr. Bush Wednesday in Arizona – a debate focused on domestic issues – Kerry detailed his energy plan and criticized the Republican-controlled Congress for failing to pass an energy bill.

Kerry argued that higher energy prices amounted to an unaffordable tax increase, as he tried to throw off Republican contentions that a Democratic administration would bring tax hikes.

Broadening his criticism beyond energy, the Democrat accused the president of looking out for special interests, not everyone's interest, in health care, taxes and other issues.

The Bush-Cheney campaign said Kerry had worked in the Senate against the president's proposals to decrease the nation's dependence on foreign oil and develop renewable energy.

"John Kerry's obstruction of a national energy policy makes his current political opportunism completely hypocritical," said spokesman Steve Schmidt. "John Kerry will tell people whatever he thinks they want to hear, and his multiple positions are destroying his credibility with the American people."

New tracking polls showed the race tight but painted conflicting pictures of who was leading. A Washington Post poll shows Mr. Bush with a 51-46 percent lead. A Reuters/Zogby poll has Kerry ahead 47-44 percent.