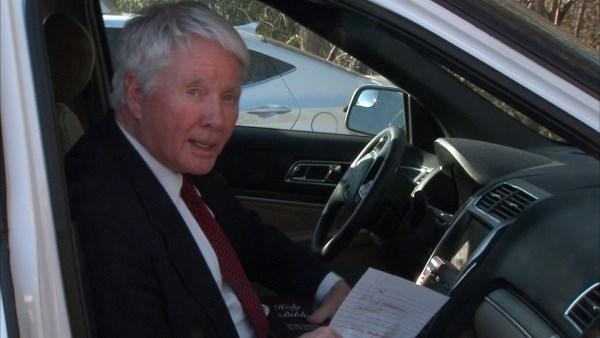 McIver has told local news media he was riding in a rear seat of an SUV on Sept. 25 when a gun he was holding discharged accidentally and the bullet hit his wife, who was sitting in the front passenger seat. She later died at a hospital.

McIver's lawyer, Steve Maples, said his client has passed polygraph tests and has cooperated fully with police and the district attorney's office.

"The indictment of Tex McIver is baseless and a blatant attempt to turn an accident into a homicide without a shred of evidence," Maples said in an emailed statement. "We will fight vigorously to prove Mr. McIver's innocence in a court of law."

Police in December had charged McIver with felony involuntary manslaughter and a misdemeanor reckless conduct, and he was free on bond. Jail records show he was booked into jail again Wednesday, and local media report that his bond was revoked because investigators found a gun in his sock drawer while executing a search warrant at his condo, which violated a condition of his bond.

Howard said the grand jury issued a "no bond" warrant for McIver's arrest.

McIver, who's in his 70s, was a partner at a prominent labor and employment law firm until he retired in December. His wife was president of U.S. Enterprises Inc., the parent company of Corey Airport Services, where she had worked for 43 years, according to the company. They lived in Atlanta's upscale Buckhead neighborhood.

McIver told Patricia Diane Carter the night of the shooting to tell law enforcement officers she was not present when he shot his wife with the intent to prevent information about a crime from being given to authorities, the indictment says. A spokesman for Howard's office confirmed that Carter was driving the car the McIvers were riding in.

McIver also on Sept. 30 illegally instructed family friend Charles William Crane to retract a statement that Crane had received from McIver and given to the news media on McIver's behalf, the indictment says. McIver intended to prevent the communication of information related to the commission of a crime to law enforcement, it says.

Several days after the shooting, Crane told local media the couple was returning home from their horse ranch in rural Putnam County, about 70 miles southeast of Atlanta, when they exited the highway to avoid traffic.

He said that as the SUV neared an intersection not far from a homeless shelter in midtown Atlanta, several people approached the vehicle. The McIvers were nervous about unrest surrounding Black Lives Matter Protests and feared a carjacking, Crane told The Atlanta Journal-Constitution.

The couple removed a .38-caliber snub-nose revolver wrapped in a plastic grocery bag from the center console. Several blocks later, near Piedmont Park, the SUV hit a bump and the gun fired, Crane said. Tex McIver, who was nodding off when they hit the bump, didn't remember firing the gun, Crane told the newspaper.

A few days later, McIver's lawyer, Maples, told the Journal-Constitution there had been no concern about unrest. Instead, he said, the McIvers pulled out the gun as a precaution after seeing people in the street in an area where homeless people hang out.

McIver fell asleep and was jarred awake near the park, Maples said.

Jeff Dickerson, a spokesman for McIver told the Journal-Constitution in January that McIver never made the comment about Black Lives Matter, but Crane told the newspaper he did.