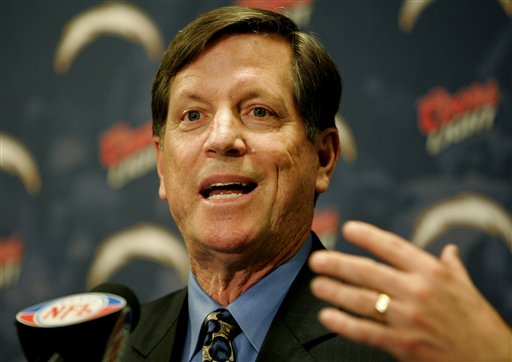 The San Diego Chargers certainly were aware that Norv Turner was 24 games under .500 and made only one playoff appearance in his nine seasons as an NFL head coach. It didn't scare them off in the slightest.

Turner got his third shot at a top job when he was given a four-year contract Monday to take over a team that went an NFL-best 14-2 before melting down in the playoffs and then in the front office.

The hiring came a week after the surprise firing of Marty Schottenheimer and less than 24 hours after the Chargers finished interviewing the last of six candidates. Turner was the only one with NFL head coaching experience and the only one from the offensive side of the ball.

The Chargers also signed Ted Cottrell a two-year contract as defensive coordinator, then added Ron Rivera as linebackers coach just hours after the Chicago Bears said he wouldn't be back as their defensive coordinator. Rivera, a linebacker on the Super Bowl champion 1985 Bears, had interviewed for the job that went to Turner.

While the immediate reaction by fans was lukewarm, the Chargers pointed to Turner's previous experience and the chance at continuity. Turner was San Diego's offensive coordinator in 2001, when he installed the system that helped carry LaDainian Tomlinson to the league MVP award in 2006.

"This isn't a team where you're rebuilding," said Turner, who had been San Francisco's offensive coordinator. "We should start fast. We should be good early and we should be good late. Not having to go through the normal things you have to go through when you make a coaching change is going to help the players more than anyone."

Turner has done well working with young players, and quarterback Philip Rivers is expected to benefit from his tutelage. Rivers was voted to the Pro Bowl as a first-year starter, but tailed off down the stretch.

Turner also knows general manager A.J. Smith, who was an assistant to the late John Butler in 2001. Smith survived a power struggle with Schottenheimer, who was fired last Monday by team president Dean Spanos, who cited a "dysfunctional situation" between the coach and GM.

Turner said he spoke with a handful of players on Monday morning and they seemed relieved there wouldn't be major changes.

"Everyone I talked to today said one central thing: We want to win a championship," Turner said. "We've been talking about it ever since I had the opportunity to interview. If it happens, it would be a heck of a deal for all of us."

It would certainly be a first. San Diego lost its only Super Bowl appearance, following the 1994 season, and hasn't won a playoff game in 12 years.

"Norv is a perfect fit for our team," said Tomlinson, whose remarkable 2006 season included NFL records with 31 touchdowns and 186 points, as well as his first rushing title. "He will know exactly what to do with our team."

Turner was one of the masterminds behind the Dallas offenses led by Hall of Famers Troy Aikman and Michael Irvin and NFL career rushing leader Emmitt Smith. He was the Cowboys' offensive coordinator for three years, including when they won the Super Bowl after the 1992 and '93 seasons.

The Chargers fell apart in their playoff opener, a stunning 24-21 loss to the New England Patriots.

Aikman credited Turner for getting the most out of the team's great talent. Aikman was so close with the coach that he picked Turner to be his presenter at his Hall of Fame induction last year.

"I think circumstances have kept him from having more success at some of the places he's been," Aikman said Monday. "I anticipate that he's going to be a great fit for the San Diego Chargers."

"I'm prety much aware of who he is and where he's been," A.J. Smith said. "But this isn't Washington and this isn't Oakland. It's the San Diego Chargers."

The Redskins and Raiders were both 4-12 when Turner took over.

Turner pointed out that those teams were near the bottom in the NFL in both total offense and defense.

The Chargers led the NFL with 492 points and 61 sacks.

While Turner might be viewed by some as a safe pick, Spanos said the Chargers were swayed by his experience and the chance at continuity.

"You can say whatever you want to say," Spanos said. "If we hadn't made a change and we lost, we made the wrong decision. If we do make the change and we lose, we made the wrong decision. So the net result of all this is, there's only one thing we have to do this year, and that's get back in the playoffs. Just get to the postseason and win the first game, is our goal. And then I think we're off to a good start."

"I'm looking at it and saying, 'This is either real good or it's real bad' as it started unfolding," Turner said. "It turned out to be good."

Turner interviewed Thursday, then was brought back Sunday night, shortly after Gibbs finished his interview.

After Terry Robiskie coached the last three games in 2000, the Redskins hired Schottenheimer, who went 8-8 in 2001 before being fired by Snyder. Schottenheimer was hired by the Chargers, a job Turner interviewed for. Turner then became Miami's offensive coordinator.

San Francisco's Mike Nolan quickly hired Turner to take over the NFL's 32nd-ranked offense. He helped Frank Gore become the NFC's leading rusher in a breakout season, and got progress from Alex Smith.

Turner had been a front-runner for the Dallas head coaching job that went to Wade Phillips, who had been San Diego's defensive coordinator.

Cottrell, previously a defensive coordinator with Buffalo, the New York Jets and Minnesota, will continue to run the aggressive 3-4 defense installed by Phillips. Cottrell spent last season working in the league office as an aide to discipline chief Gene Washington.

Rivera was given a two-year contract as linebackers coach.