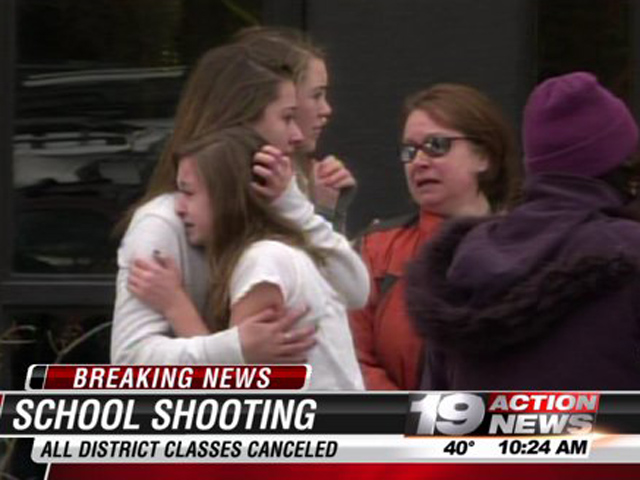 (CBS/AP) CHARDON, Ohio - A student who was just feet away when a gunman opened fire at Chardon High School early Monday morning says she heard strange sounds in the hallway, then saw the gunman begin to shoot.

High school student Heather Ziska says she was in the cafeteria around 7:30 a.m. when she and other students began hearing popping noises in a nearby hallway. The 17-year-old says she then saw a boy with a gun who she recognized as a fellow student come into the cafeteria and start shooting.

Ziska says she and several others immediately ran outside, while other friends ran into a middle school and others locked themselves in a teachers' lounge.

Another student, Jonathan Sylak, was near the cafeteria when he heard loud popping noises followed by people screaming and beginning to run.

CBS affiliate WOIO reports five students - four boys and one girl - were injured in the gunfire.

According to WOIO, a teacher chased the accused gunman from the building where the shooting took place. The boy reportedly surrendered to two bystanders an hour later.

The conditions of the injured students have not yet been released. According to Fox affiliate WJW, Geauga County Sheriff Daniel McClelland said three victims were taken by LifeFlight to MetroHealth Medical Center, and two others are being treated at local Hillcrest Hospital.

Chardon High School, as well as other schools in the area, are now on lockdown.

The superintendent immediately canceled classes at all Chardon schools. Students still on school buses were being dropped back off at their homes, and parents are being called to pick up students already at school.