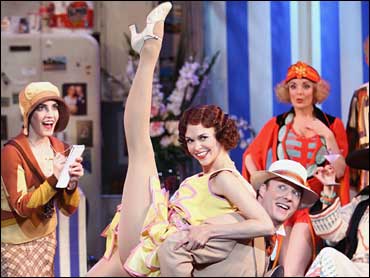 Close behind with 11 was "The Color Purple," the Oprah Winfrey-produced musical based on Alice Walker's novel about a determined woman's triumph over adversity.

The revival of "The Pajama Game" got nine bids, while tied at eight were "Jersey Boys," the gritty show-biz tale of Frankie Valli and the Four Seasons, and the revival of "Awake and Sing!"

"The History Boys," Alan Bennett's London success about a group of boisterous students trying to get into Oxford or Cambridge, received seven nominations, including best play.

The other best play nominees: "The Lieutenant of Inishmore," Martin McDonagh's comic splatterfest about a crazed Irish terrorist; "Shining City," Conor McPherson's ghost story set in present-day Dublin; and "Rabbit Hole," David Lindsay-Abaire's look at a suburban couple attempting to deal with the death of their young son.

"The Wedding Singer," a celebration of the 1980s and based on the Adam Sandler-Drew Barrymore movie, will compete for best musical.

The actor-play candidates included Ralph Fiennes who plays the title character in Brian Friel's "Faith Healer," and Richard Griffiths, a beloved teacher in "The History Boys," while among the actress-play hopefuls were Cynthia Nixon, the distraught mother in "Rabbit Hole," Judy Kaye in "Souvenir," and Kate Burton in "The Constant Wife."

Julia Roberts, who received gently scathing reviews for her performance in Richard Greenberg's "Three Days of Rain," did not get a nomination.

Harry Connick Jr., however, did get a nod for his Broadway debut in "The Pajama Game." His competition: Michael Cerveris, the bloody barber in "Sweeney Todd"; John Lloyd Young, who portrays crooner Frankie Valli in "Jersey Boys"; Bob Martin, the co-author and narrator-star of "The Drowsy Chaperone"; and Stephen Lynch, the lovesick hero of "The Wedding Singer."

Kelli O'Hara, Connick's co-star in "The Pajama Game," received a nomination for actress-musical, as did Broadway veteran Patti LuPone, the industrious pie-maker in "Sweeney Todd."

Their competition: LaChanze, the beleaguered heroine of "The Color Purple"; Sutton Foster for "The Drowsy Chaperone"; and the legendary Chita Rivera for playing herself in "Chita Rivera: The Dancer's Life."

The Early Show's Harry Smith introduced Tony winners Natasha Richardson, Liev Schreiber and Phylicia Rashad as they announced the nominees for the 60th Annual Tony Awards live from Lincoln Center on May 16 in New York City.

Who takes home the awards will be settled June 11 at Radio City Music Hall, where the winners will be announced in a three-hour telecast, beginning 8 p.m. EDT on CBS.