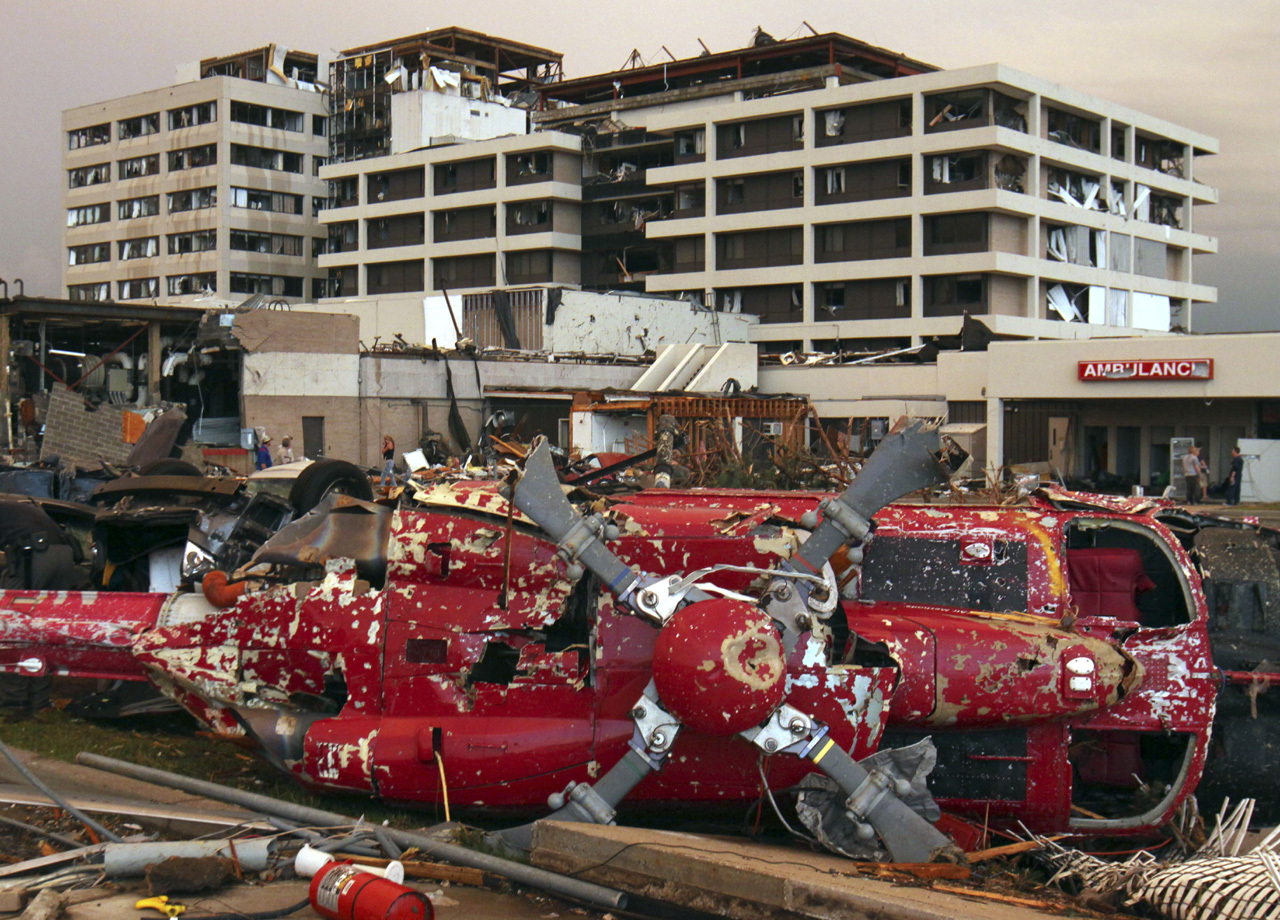 The building started shaking, the lights began to flicker and 16-year-old Elliott could feel the wind coming up beneath the floor in his grandfather's seventh-floor hospital room. It was time to make a move, he decided, and that's what Elliott and his grandmother did, making a dash for the relative safety of an inside stairwell.

Up to that moment, "we had no idea it was going to blow," Elliott said.

The tornado that smashed Joplin on Sunday evening, killing at least 116 people, also ravaged one of the town's major hospitals just when it was needed the most.

Walls in the modern, nine-story high-rise were knocked 10 feet out of place and rooms were strewn with broken glass, concrete, ceiling tiles and other debris. Windows were blown out; X-rays and medical records were sucked up and dumped two counties away.

Hospital officials say five patients and one visitor were killed.

"A few minutes later, I got a text from my team, Dr. Smith, who told me the hospital is on fire, the emergency room was gone."

Dr. Riscoe hopped into his car, but what would ordinarily have been a two-minute drive took 20 minutes, slowed by downed power lines and trees.

He described the scene at St. John's once he arrived: "The hospital is on fire. Smoking trees - trees were down, power lines were sparking. Pretty much chaos.

"But the medical staff was orderly, moving patients out of the hospital. The emergency room had been evacuated. I came up, made sure everybody was okay. They told me we were going to establish on the alternate side of Memorial Hall. I took what I could and got going."

The entire 367-bed hospital was evacuated for fear of structural damage after the twister had passed. Some patients were taken out in wheelchairs, while others - unable to make their way out on their own after the elevators were disabled - were slid down the stairs on mattresses.

Doctors and nurses set up a triage center in the parking lot amid crushed cars and a smashed helicopter, but once the storm victims were evaluated, they had to be sent to other hospitals for treatment.

Dr. Riscoe praised the St. John's staff: "They're very professional and they're the kind of people that you just can't knock down. ... Having my experienced team with me in the emergency room was incredibly easy to continue to do what we were doing in another place [which was] a little difficult because we were deaf, dumb, and blind - lost our cell tower capacity and communications."

Some staff members who reported to work at St. John's after the tornado struck were themselves injured but toiled through the night anyway.

On the morning after the storm, parts of the hospital — one of Joplin's tallest buildings — appeared bombed out.

"I spent most of my life at that hospital," Dr. Riscoe said, his voice cracking. "It's awful. I had two pregnant nurses who dove under gurneys. I had staff who showed up. They were hurt, but they worked all night long. It's a testimony to the human spirit."

In the frightening minutes before the twister struck, the hospital declared a "Condition Gray," and patients, relatives and staff members were told to leave their rooms and go into stairwells and other protected interior parts of the building. A total of 183 patients were in the building, authorities said.

Riscoe compared the carnage to what he saw in 1981 when he dealt with the collapse of a skywalk at the Hyatt Regency hotel in Kansas City, where 114 people were killed. He said it also was similar to the scene in Haiti last year when he went there to help after the earthquake.

"It looked like a nuclear disaster had happened. Cars had been thrown like playing cards. Power lines were sparking. I couldn't believe it," Riscoe said.

Elliott and his grandmother were among the fortunate. When they emerged from the stairwell, they didn't recognize the hospital.

The Wichita, Kan., teenager said that when the twister struck, he didn't have time to move his grandfather from his hospital bed and left him behind. When Elliott returned to the room, it was littered with debris, but his grandfather had suffered just one small scratch on his head.

While Elliott said he didn't hear the warning from the hospital staff to take cover, he said the doctors took control afterward, ordering everyone to evacuate the building as fast as possible. For the patients who couldn't walk, Elliott and others used mattresses to slide them down the stairs.

On the way out, Elliott saw at least three patients being given CPR. He also heard someone yell, "We've got a dead guy here!" on the third floor.

Officials said the hospital was completely evacuated within 90 minutes after the tornado. When Elliott finally emerged with his grandparents safe, he was shocked to see cars piled on top of one another. He looked back to see windows blown out, curtains whipping in the wind and bent pieces of metal covering the building.

"I was just trying to grasp it all," Elliott said.

On "The Early Show" Dr. Riscoe said, while he was worried about the physical condition of the medical center, "the hospital will come back in some way. This is a two-hospital town. And the other has taken the brunt of the patient load. But this town can't survive without two operative hospitals. We're pretty much matched evenly, so one way or the other, we're going to have to bring it back to that capacity."