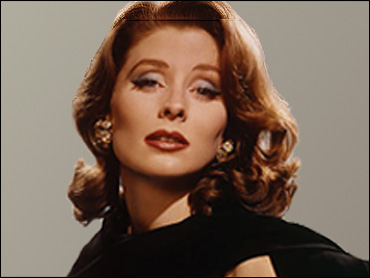 Model-actress Suzy Parker, one of the most recognizable faces of the 1950s and a forerunner of the supermodel, has died. She was 69.

Parker, known in later life as Suzy Parker Dillman, died Saturday night at her home in Montecito, according to her stepdaughter, Pamela Dillman Harmon.

Parker, known for her full, red hair and beautiful bone structure, was the signature face for designer Coco Chanel, photographed by the likes of Richard Avedon and Milton H. Greene. Greene once said Parker helped redefine the word "elegance" in magazines.

Author Eleanor Dwight, in her 2002 biography "Diana Vreeland," about the famed fashion editor who gave Parker her start, said Parker was "the" model of the 1950s. She was at one time the highest paid model, earning $200 an hour.

"I believe in the gold standard," Parker told The Washington Post in the early 1960s. "I like solid lumps of things. You can always melt them down."

In 1957, Parker made her Hollywood debut in the musical "Funny Face," starring Fred Astaire and Audrey Hepburn. She danced in a number called "Think Pink" that spoofed fashion editors like Vreeland.

Parker's other film credits include "Kiss Them for Me" (also 1957), opposite Cary Grant, and "Ten North Frederick" (1958) starring Gary Cooper. She also appeared in "The Twilight Zone" and "Tarzan" television series.

Dillman, born Cecelia Anne Renee Parker, was the younger sister of model Dorian Leigh, who graced the cover of fashion magazines beginning in the 1940s.

Leigh helped her sister get into modeling at the age of 14, according to the Vreeland biography. She took her sister to see modeling agent Eileen Ford, who promptly declared that the teenager - at 5 feet, 9 inches - was too tall.

But Vreeland wasn't put off by Parker's height and put her to work.

In Hollywood, Parker met her third husband, actor Bradford Dillman, who is best known for his work on television, on just about every show from "Kraft Television Theater" and "Dr. Kildare" on through "McCloud" and "Murder, She Wrote." They married in 1963. The couple moved to Montecito in 1968 to escape the celebrity life, longtime friend Nancy Failing said.

"She'd led the glamorous life and she was ready to draw in her horns," Failing said.