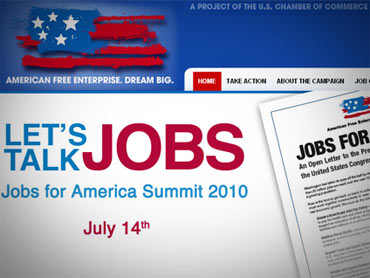 On the same day the Obama administration released a reporting hailing the number of jobs saved or created by the stimulus, the U.S. Chamber of Commerce today launched a broadside assault on the White House for policies they say are hostile to economic growth and, therefore, job creation.

At a summit on job creation, the Chamber blasted Obama administration policies it says are leading to economic uncertainty and an unnecessary regulatory burden on business.

Washington's current leadership is responsible for a "general attack on our free enterprise system," said Tom Bell, chairman of the board of directors for the Chamber.

"For the first time in my 40 years of observation, our free enterprise system is truly at risk," he said. "If we allow Congress and the administration to continue to spend... we're setting ourselves up to be the next Greece."

Citing recently established policies like health care reform and policies the White House is still pursuing, like curbing greenhouse gas emissions, Chamber President and CEO Tom Donohue said, "The regulatory activity now underway is so overwhelming and beyond anything we have ever seen, that we risk moving this country away from a government of the people to a government of the regulators."

The Chamber laid out these recommendations -- and plenty of criticism -- in a scathing open letter to President Obama and Congress released today. The letter took the White House and Congress to task for taking "their eyes off the ball" and neglecting job creation.

"Government can either help the private sector create jobs or it can drive jobs away," the letter says. "No matter how well intentioned or politically popular a proposed law or regulation appears to be, the question must always be asked, What will the impact be on jobs?"

In response to the letter, White House Chief of Staff Rahm Emanuel and senior White House adviser Valerie Jarrett wrote back to the chamber that the business community "fails to acknowledge the important steps that the administration has taken every single day to meet our shared objectives."

While the Chamber largely opposes most Obama administration policies, it did back the much-disputed stimulus.

The White House's latest report says the Recovery Act has "saved or created" between 2.5 million and 3.6 million jobs. Christina Romer, head of the White House Council of Economic Advisers, said today that the $100 billion in Recovery Act funds will partner with close to $300 billion of other funds, the majority of which are from the private sector, CBS News White House Correspondent Mark Knoller reports.

Donohue said the Chamber backed the stimulus because "we thought we were days away from a global recession."

While the stimulus has not created as many jobs as was hoped for, Donohue said, "Would I do it again at the same time? Hell yes."

He added, however, "Would I do another one? No."

Donohue said it was important to emphasize the need to ease regulations, even though lax regulations were in part responsible for the massive, ongoing oil spill in the Gulf. In its letter today, the Chamber also recommended tapping unused oil and gas reserves to generate more growth, as well as opening national forest lands for harvesting timber.

Even though the Gulf oil spill continues, Donohue said, "there are thousands of other" rigs, he said, "that have never spewed."

Emanuel and Jarrett wrote today, "We will not stand by while oil and gas companies continue to fight needed changes to the outdated regulations that are partially responsible for one of the worst environmental crises in American history."

To make the case for the connection between economic growth and job creation, the Chamber's chief economist Martin Regalia today laid out a comparison between the current economy and the state of the economy following prior recessions. Economic downturns in the mid-1970's and early 1980's were followed by strong growth. By contrast, the U.S. economy has grown at an average of 3.5 percent in the last three quarters.

"The problem is we're simply not growing fast enough," Regalia said. "We need economic growth above the 3 percent level if we're going to create jobs."