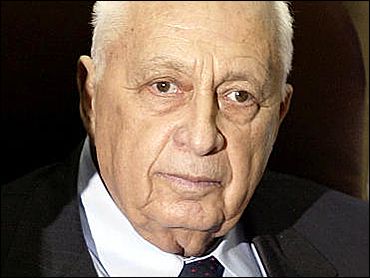 Israeli Prime Minister Ariel Sharon said Thursday that he would push ahead with a withdrawal from the Gaza Strip despite a stinging setback to the plan from his Likud Party.

A Likud convention voted overwhelmingly late Wednesday to bar Sharon from inviting the opposition Labor Party into the government.

Although Sharon insisted the vote wasn't binding, it could endanger the pullout, which he hopes to complete next year. Sharon is courting Labor to shore up support in parliament for the withdrawal plan.

In a speech to parliament, Arafat admitted Wednesday to making "mistakes" and pledged to clean up the Palestinian Authority.

But in a "stormy and tense" follow-up meeting late Wednesday, Arafat told pro-reform lawmakers "that his speech … was enough and that there is no need for any signatures," said Azmi Shouabi, one of the meeting's participants.

Shouabi said the lawmakers had agreed to meet with Arafat one more time before submitting a report to parliament next week.

Arafat has been under intense local and international pressure to reform his government and relinquish some of his powers, but has repeatedly balked. Although Arafat does not appear to be in danger of being overthrown, the public criticism has reached an unprecedented level.

Sharon is facing his own internal challenges, due to strong opposition within his party to his plan to pull out of the entire Gaza Strip and four West Bank settlements next year. Sharon says the moves are necessary to boost Israel's security and preserve its Jewish majority.

The Likud convention vote Wednesday wasn't close, with 60 percent in favor of banning Labor from the government. Hard-line Likud members oppose an alliance with Labor, fearing further concessions to the Palestinians.

The vote was Sharon's second major setback from the party. In May, a nonbinding Likud referendum rejected the withdrawal plan by a 60-40 margin.

In his first public reaction to the vote, Sharon's office said Thursday that "the prime minister is determined to continue with the disengagement plan and the diplomatic process and he will try to build a stable coalition."

A government official, speaking on condition of anonymity, refused to say whether Sharon would continue talks with Labor. The prime minister could also seek smaller religious parties to bolster his coalition.

Sharon, who has lost his parliamentary majority because of the plan, opened negotiations with Labor leader Shimon Peres last month. He will need parliamentary and Cabinet approval for the plan in the coming months in order to proceed.

The Likud vote, however, could stall or even scuttle those efforts. Sharon will find it hard to muster a parliamentary majority without Labor.

Opponents warned that following the vote, Sharon would not be able to approach Labor now. "Sharon cannot ignore the wishes of his party," said Likud lawmaker Michael Ratzon.

Labor denounced the results, saying Likud had become "a movement that destroys all chances to bring about an end to violence in the region." The Labor statement said "elections must be called immediately."

General elections are due by 2006, and a new government could be a short-term affair. Likud-Labor coalition negotiations stalled earlier over domestic issues.

After a Labor meeting Thursday, lawmaker Amram Mitzna told Army Radio the party would prepare for elections, although it remains open to continuing talks with Sharon.

Labor favors Sharon's "unilateral disengagement" plan. Labor advocates an Israeli pullout from Gaza and most of the West Bank for peace with the Palestinians. The Palestinians want to establish an independent state in the two areas, which Israel captured in the 1967 Mideast war.

Elsewhere, Israeli troops rounded up dozens of Palestinians Thursday morning at the West Bank refugee camp of Ein Beit Ilma in Nablus, corralling the men in a school yard.

Military officials said soldiers detained men under age 45 for questioning about involvement in violence. The officials, speaking on condition of anonymity, said some were released in the afternoon and others were taken for interrogation. They declined to say how many people were held.

Two others, including a 13-year-old boy, were wounded. Witnesses said the shooting was unprovoked. The army said soldiers fired at two Palestinians in an off-limits zone, hitting one.

The rockets landed in three areas of Sderot, a town near the border with Gaza. The boy was hit in the leg by a rocket fragment, rescue workers said.

State Department spokesman Adam Ereli said the Bush administration was "studying the details" of the planned construction to see if it met the commitments Israel made under the Road Map to freeze all settlement activity. Pressed by reporters, Ereli said he could not explain how 1,000 new buildings could not be a violation of that commitment, adding "not everything we say to the Israelis is on the record."