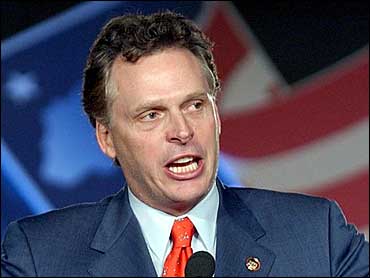 This column from The Nation was written by David Corn.


Please shut up, Terry McAuliffe -- that is, about George W. Bush and his missing-time in the Texas Air National Guard.

I keep receiving press releases from flacks at the Democratic Party about Bush's Guard service (or lack thereof). For instance, moments before John Kerry delivered a major speech on September 20 that refocused his campaign with a blast against Bush's war in Iraq, the Democratic National Committee press office emailed me and other reporters an invitation to participate in a conference call with McAuliffe on Bush and the Guard. The call was scheduled to occur in the middle of Kerry's speech.

Shouldn't the Democratic Party that day have been reinforcing Kerry's message that Bush has screwed the pooch in Iraq and that Kerry has a plan for dealing with the mess Bush created? Instead, McAuliffe and his crew at DNC HQ thought it was best to take yet another swipe at Bush for cutting out on the Guard.

Despite the success of the Swift Vets' assault on Kerry -- as fact-free as much of it was -- McAuliffe and the party are wrong to obsess over what Bush or did not do three decades ago. I've written frequently about Bush and the Guard, and I encourage journalists and researchers to pursue the story. But Bush's military service should not be a frontline battle for the Democratic Party. By raising the issue incessantly, McAuliffe and the party will not persuade voters. Voters probably have already reached their conclusions about that 32-year-old episode and its significance. Absent new information -- material not based on forgeries -- McAuliffe should not be beating this horse further.

The matter is a sideshow. Whatever Bush did way back then, his record in the White House is more critical -- particularly what he has done since September 11, 2001. Kerry is right to confront Bush directly on the war in Iraq and the misnamed war on terrorism. He has little choice. Bush has deftly and effectively defined the election not only as a referendum on the war in Iraq but a contest to determine which candidate is more decisive and better able to lead a strong and assertive attack on America's enemy. And as president and as head of a party machine that is maniacally disciplined when it comes to message development and promotion, Bush has the power to set the terms of the debate. (Kerry cannot snap his fingers and declare that this election is really about health care and outsourcing.) So the final stretch of this election will focus on who can best be the protector-in-chief. What Kerry did in Vietnam, what Bush did not in Vietnam (and Alabama) is largely irrelevant in this discussion.

Yet as Kerry tries to gain ground in this debate -- today he gave a strong speech outlining his specific ideas for countering the terrorist threat posed by Islamic extremists -- McAuliffe and his DNC colleagues keep yapping about Bush's Guard record. On Wednesday, they put out a press release asking why Bush aides have offered conflicting explanations for Bush's failure to take a flight physical in 1972. And after the New York Post reported that the "hot rumor in New York political circles has Roger Stone, the longtime GOP activist, as the source for Dan Rather's dubious Texas Air National Guard 'memos,'" McAuliffe issued a statement, in which he asked, "Will [GOP chairman] Ed Gillespie or the White House admit today what they know about Mr. Stone's relationship with these forged documents? Will they unequivocally rule out Mr. Stone's involvement? Or for that matter, others with a known history of dirty tricks, such as Karl Rove or Ralph Reed?" C'mon, who believes gossip reported in the Post?

When CBS News announced it no longer considered the documents authenticated, McAuliffe put out an official statement urging the public and the press to "focus on the facts," not the forgeries. "The American people," he said, "already know that strings were pulled to get President Bush into the Guard; and while in the Guard he missed months of service and was grounded. We know that George Bush was a fortunate son, a child of privilege, who refuses to admit that he used his connections to avoid fulfilling his requirements. But what we still don't know is why Bush didn't fulfill his duty to his country or why he has continued to lie to the American people about it."

There is nothing wrong or inaccurate in what McAuliffe has been saying about Bush and the Guard. But his job should be amplifying Kerry's message. The GOP does that for Bush perfectly. Each day I receive numerous emails from the Republican Party that are on-message in a zombie-like fashion. Then I turn on the cable news shows and see White House officials, Bush campaign aides, and other Republicans mouthing the linedu jour -- all in complete lockstep. They generally have stayed away from explicitly seconding the Swift Vets' attacks, unless asked.

Kerry has decided that his best chance is to go after Bush directly on the war -- this war, not that war. In his speech today, Kerry did not even bother to refer to his own Vietnam service. Instead, he highlighted his policy ideas, as well as his experience in the Senate concerning terrorism and other related national security matters. (Mark Mehlman of the Bush campaign offered the predictable response to Kerry's address. He called it one more flip-flop from a fellow who said the United States "would be safer if Saddam Hussein was still in power.") So McAuliffe ought to get on board and let other partisans bash Bush for being MIA as a Guardsman. (What's a 527 for?) Kerry has adopted a tough course, though it may be the only path available. He must convince voters that Bush, a wartime president, ought to be fired because he botched the fight against al Qaeda by recklessly launching an elective war for which he did not plan adequately. And Kerry must also persuade voters that, despite the accusations of flip-flopping, he will be a stronger leader than the swaggering, you-know-where-I-stand Bush.

There's not much time for Kerry to do all this. And the debates -- which start on September 30 -- will be his best opportunity to put his case before a large group of potential voters. (National security will be the focus of the first debate.) Kerry could use all the backup he can get. McAuliffe and the party should be boosting Kerry's message -- by criticizing Bush for the war, not events from the early 1970s. The Guard issue certainly plays well among Bush-bashers and, no doubt, it is tempting for McAuliffe and his fellow Bush-whackers at the DNC to engage in such easy attacks. But they ought to resist. They need to concentrate their fire on the main target: what Bush has done in Iraq. Both Kerry and Bush agree that is what this election is about. McAuliffe should salute and follow Kerry's charge up a hill that will be rather tough to take.

David Corn is the Washington editor of The Nation magazine.

By David Corn
Reprinted with permission from The Nation