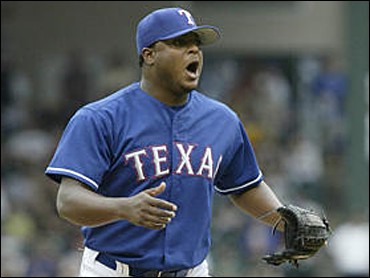 The Oakland Athletics and Texas Rangers disagreed over who to blame for an altercation in the stands that led to the arrest of Rangers reliever Frank Francisco after he threw a chair that hit a woman and broke her nose.

Dave Rinetti, A's vice president of stadium operations, said Tuesday a review of the ninth-inning fracas the night before — which took place in the lower-box seats between the Texas dugout and bullpen — showed the fans' behavior was not over the line according to baseball's rules of conduct that are posted at every ballpark entrance.

"The incident became ugly when players approached the seating area," Rinetti said before the teams played the second game of the four-game series.

He noted the fans did not yell racial slurs or swear at the Texas players.

Yet Rangers manager Buck Showalter was quick to point to previous problems the Rangers have had in the Oakland Coliseum. He claimed the Rangers had asked for more security in the area, but Rinetti said neither he nor his security staff had been approached with such a request.

Still, the A's beefed up security for Tuesday's game and the remainder of the series — and probably for the rest of the season.

Francisco was arrested Tuesday morning on a charge of aggravated battery after he threw a chair into the right-field box seats and hit two spectators in the head during the 7-6, 10-inning loss.

The injured woman, identified by her lawyer Tuesday as Jennifer Bueno, 41, of Livermore, wants Francisco to be prosecuted. A civil suit is also a likely possibility, since she will need medical treatment, said the lawyer, Gary Gwilliam.

Bueno's husband, Craig Bueno, is a battalion chief with the Hayward Fire Department. Gwilliam would not comment on what Bueno might have yelled at the Rangers' players before the fracas, saying he would let the man speak for himself at a news conference on Wednesday.

"There is no justification for what they did," Gwilliam said. "Fans are fans and they have a right to have some fun and do some badgering if they want."

Gwilliam said it wasn't just Francisco who went after the A's fans.

"It's the whole damn team that tried to charge and fight with the fans," he said.

Francisco was taken from the stadium to jail, where he was booked and his mug shot was taken. He was released about two hours later on $15,000 bail, Oakland Police spokeswoman Danielle Ashford said.

Bob Watson, the vice president of on-field operations for baseball, will decide what punishment will be handed out to the players, while Selig said he would monitor the process.

"There is no excuse whatsoever for any attack of our fans by any of our players under any circumstances," Selig said in a statement.

The A's were trying to contact the woman to apologize.

After the game, Showalter said the fans "went over the line."

"It was a real break from the normal trash you hear from fans. We've had problems about every time we've come here," he said.

But on Tuesday, Texas owner Tom Hicks apologized "for the conduct of some members of our club."

"Their behavior, especially the injury to a fan, was unacceptable. Even in a difficult or abusive environment, players should never be provoked into such actions," Hicks said in a statement. He did not say whether Francisco or any other player would be punished.