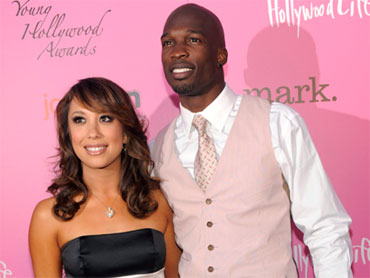 Chad Ochocinco went from the dance floor to the awards podium Thursday
when he accepted his Athlete of the Year honor at the 12th Annual Young Hollywood Awards.

Ochocinco walked down the red carpet before the event with his "Dancing" partner, Cheryl Burke. Other stars at the event included the Jonas Brothers, Ashley Greene, Nikki Reed and Liam Helmsworth.

Justin Bieber took home the Newcomer of the Year -- but the young singing sensation didn't receive his award in person when trophies were handed out Thursday night. Instead, he sent a video message from the set of his "Somebody to Love" music video, expressing thanks for the award.

Nick Jonas received the Artist of the Year award, while Ochocinco, who is currently competing on "Dancing with the Stars," won Athlete of the Year.

"Twilight" stars Reed and Greene, respectively, took home the awards for Superstar in the Making and Style Icon.