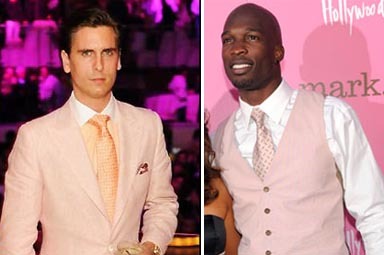 The Cincinnati Bengals wide receiver challenged Disick to a fashion faceoff via his Twitter account after watching him on an episode of "Kourtney and Khloe Take Miami."

"Dude, I'm watching the show, who the [expletive] does your suits, very nice, send them my way. I'm ready for a suit off anytime!" Ochocinco wrote.

Disick, who is Kourtney Kardashian's beau and baby daddy, simply responded and wrote, "I'm ready for a suit off any day."

Although Disick carries the reputation as the fashionable villain on the E! reality TV series, Ochocinco is no stranger to dressing up.  ABC viewers saw him clean up nicely while competing on this past season of "Dancing with the Stars."

Tell us, who do you think would win in the suit challenge?