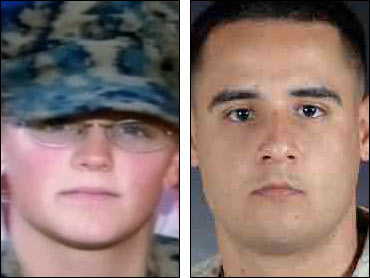 GOLDSBORO, N.C. (CBS/WNCT/AP) A jury took less than three hours to find former Marine Cesar Laurean guilty of first-degree murder in the death of his pregnant colleague Lance Corporal Maria Lauterbach after she accused him of rape.

Laurean, 23, has been sentenced to life in prison without the possibility of parole. A defense attorney says he will appeal his conviction.

District Attorney Dewey Hudson said he was "pleased" with the verdict, one that's taken more than two years to come after Maria Lauterbach's charred remains were found buried in Laurean's backyard, a month after she was murdered in December 2007.

After the verdict was read, Mary Lauterbach, Maria's mother, read a prepared statement. "Maria will always be our hero," she said. She told Laurean to look at his mother, saying that her heart breaks for his family too. "Now you will have time to think about your shame, time to think about your failures," she said. "There are many people out there who will die today, people who would love to have the time that God has given you."

Laurean was also found guilty of financial transaction card theft for using Lauterbach's ATM card, but not guilty of robbery with a dangerous weapon, says WNCT.

According to CBS affiliate WNCT, in his closing argument, Hudson referred to Laurean as a "coward," saying that a coward would hit a pregnant woman in the back of the head with a crowbar.

Defense attorney Dick McNeil had argued that in a fit of rage, Christina Laurean, Cesar's wife, could have swung a crowbar hard enough a single time to cause Lauterbach's death.

Lauterbach's rape accusation never was corroborated, but a Marine buddy testified Laurean told him the sex was consensual. A DNA test would prove later that Laurean was not the father of Lauterbach's child. She was seven months pregnant when she died.

Even if the rape accusation was false, the married father of a young child faced having his career derailed for committing adultery with a subordinate, District Attorney Dewey Hudson said. Laurean had already been ordered to stay away from Lauterbach, and his Marine superiors said a hearing on the rape allegation was approaching.

"He was a married man. He was her boss. He had sex with her," Hudson told jurors in his closing argument. "He's damned if he does or damned if he don't."

The two were assigned to the same logistics unit at Camp Lejeune, the base in Jacksonville, N.C., that is home to about 50,000 Marines. The trial was moved because of extensive pretrial publicity.

Cesar Laurean fled to Mexico before being caught and extradited back to the U.S. in April 2009. Prosecutors agreed not to seek the death penalty so Mexican authorities would return Laurean, who was born in Guadalajara, to the U.S. Laurean was kicked out of the Marines after fleeing as investigators closed in.