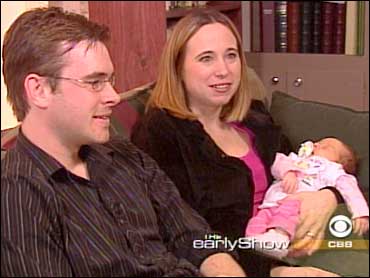 The treatment for cervical cancer often leaves women unable to have babies.

Senay says the normal course of treatment, such as surgery to remove the uterus and chemotherapy and radiation, frequently results in infertility.

But a new surgical technique may change that.

Melissa Gilbert, of Scotia, N.Y., was told two years ago she had early-stage cervical cancer, and that her treatment would prevent her from having another child.

"It was devastating," Gilbert recalled, "… and to then find out that the treatment for it is going to cost me my fertility and will prevent me from having any more children was just as devastating for me."

But Gilbert and her husband searched for an alternative and found Dr. Nadeem Abu-Rustum at in New York, one of a handful of doctors performing a new surgery for cervical cancer called a trachelectomy.

The approach leaves most of the womb intact, preserving a woman's ability to become pregnant and bear a child.

Abu-Rustum showed Senay a depiction of a cervical cancer tumor.

He says women who have the surgery have a "very realistic, actually a very good chance" of future pregnancy and delivery.

Abu-Rustum cautions that the operation is "done for a very select group of patients who have early-stage cervical cancer (that hasn't spread), usually stage-one patients, so the cure rate appears to be very similar, almost identical to a radical hysterectomy, and approximately 90 percent of patients are cured with this operation."

Gilbert was. She had a full-term pregnancy with the help of in vitro fertilization.

"As soon as we saw her, it was just instant love, instant relief, instant joy," Gilbert told Senay. "We said to each other, 'I can't believe it.' And now, when I get to see her interacting with her older sister, it's just what I wanted for her and for us, and it's just wonderful."

If the surgery isn't an option, Senay says, doctors may be able to preserve fertility in other ways, such as harvesting the eggs or ovaries before the cancer is treated.