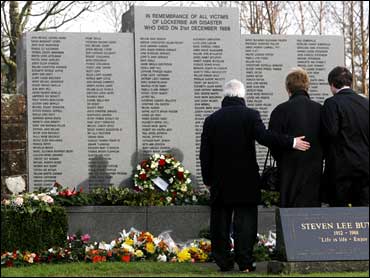 Ceremonies were held Sunday in the Scottish town of Lockerbie to mark the 20th anniversary of the bombing of Pan Am Flight 103, in which 270 people were killed.

More than 150 people attended a wreath-laying ceremony Sunday at Lockerbie's Dryfesdale Cemetery, which has a memorial stone for those who died.

Two churches in the area held services to coincide with the moment the plane came down, just after 1900GMT on Dec. 21 1988. Services are also being held at Heathrow Airport in London and in the United States.

All 259 people on board the flight from Heathrow to New York were killed when a bomb exploded on the plane as it flew over Lockerbie.

This previously unremarkable town has become a site of pilgrimage ever since fate literally brought Pan Am 103 and the attention of the world down upon it. In addition to those killed on the plane, 11 Lockerbie residents died that night too. And many had narrow escapes.

"And I was sitting, and I just suddenly heard this roar, a loud roar, and everything started shaking," says Maxwell Kerr, who was living near the crash site.

Some of the houses in the neighborhood have been repaired, reports CBS News correspondent Mark Phillips. But, nothing has been rebuilt where others were destroyed and families perished.

Where the flattened cockpit of the plane had landed - in what became the iconic image of the disaster - sheep now graze.

A small chapel in a churchyard contains a book of remembrance with short tributes to the victims. Their names are carved into a memorial in the town's cemetery.

But the disaster isn't buried under memorials and well tended gardens. Twenty years later there are still issues for the families of the victims. And there is still the untidy matter of whether the right person has been punished, Phillips reports.

Some have accepted the conviction Abdelbaset Al Megrahi for planting the bomb that blew up the plane and have taken his jailing for life as closure.

Others like Jim Swire, whose daughter Flora was among the dead, have not.

"I am well aware that what we are doing is disturbing to those who think they found closure through the conviction of the Libyan Megrahi," Swire says. "I feel I can't countenance my daughters memory being associated with a complete fabrication, which unfortunately I think that the conviction of this man was."

Magrahi is now dying of cancer in prison and is not expected to live to live long enough for his next appeal to be heard, Phillips reports. For the governments of Britain, the U.S. and Libya, the matter is closed. But for many others, it will never be over.

Al-Megrahi is the sole person to have been convicted of the bombing, but he has won the right to appeal against his January 2001 conviction by successfully convincing judges that a "miscarriage of justice" may have occurred during his trial.

The Lockerbie bombing drove relations between Libya and the West to the breaking point. But the dynamics of the case have changed as Libyan leader Col. Moammar Gadhafi engineered a rapprochement with the West in the dangerous times following the 9/11 attacks on Washington and New York.

The self-styled revolutionary leader, who once seemed to thrive on confrontation, has renounced terrorism and voluntarily dismantled his clandestine program to develop nuclear weapons.

Britain, the United States and Libya are now publicly committed to working together to contain the threat of international terrorism.

Libya has paid several billion dollars to the families of Lockerbie victims, and has accepted "general responsibility" for the attack.

U.S. officials, and the families involved, said in November that Libya had made the final compensation payments. These acts of contrition have allowed Libya to restore diplomatic ties with Britain and the United States and to have United Nations-imposed sanctions lifted.