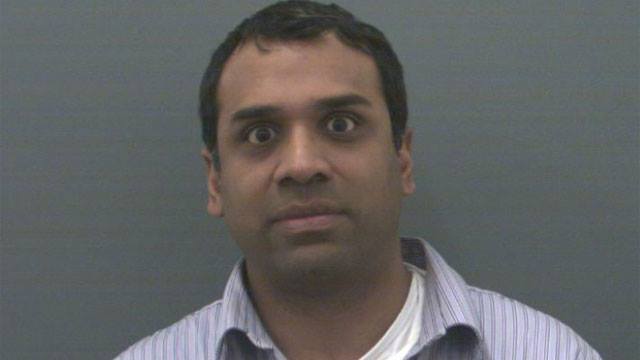 The promotion was approved on Tuesday while Shankar sat in the Hartford Correctional Center - inmate number 3-9-6-9-6-4, according to the station, which reports that Shankar was arrested late last week for violating probation.

Court documents show Shankar has had prior brushes with the law include admitting he lied to police about charges on his credit card statement.

According to the station, Shankar used CCSU computers to buy $22,000 worth of tickets to a soccer game in New Jersey. He originally said it was fraud, but later told police he wanted to sell the tickets to help pay off $70,000 in credit card debt.

He has also been arrested for driving under the influence and, almost two years ago, he was reportedly arrested for giving police another person's drivers license after a car crash.

In explaining how the promotion occurred, CCSU President Jack Miller called it a "very complex situation." He said the Board of Regents, which approved the decision to promote Shankar, was unaware of his legal troubles.

"...The simple answer is, it was my responsibility to inform the Board of Regents and I did not. At the time of the Board's action I was not aware that Professor Shankar had been incarcerated. I have asked my staff to conduct a full investigation," Miller said.

Shankar is due back in court next week.

(Editor's note: The "other" Ravi Shankar was a noted Indian musician, player of the sitar, who earned many accolades, and also performed with Beatles guitarist George Harrison)