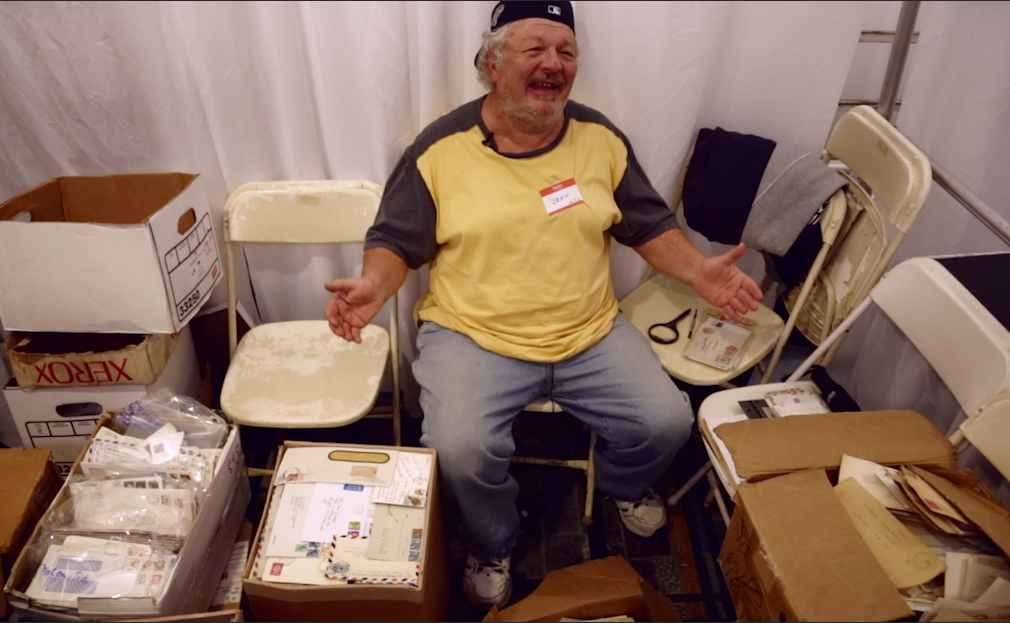 NEW YORK - On the centennial anniversary of the annual American Stamp Dealers' Association, hundreds of philatelists - people who study and collect stamps--flocked to a hotel hall in midtown Manhattan littered with dozens of booths. Each table proudly displayed the collection of its dealer; each as unique as the stamps they displayed.

"You have to like it, it has to come from here," one participant, who gave his name simply as John, said while patting his chest. "Otherwise it won't make sense to you or to anybody else."

John has dedicated the past 58 years to philately. Dressed in a bright yellow t-shirt and pair of faded Levis, and sporting a backwards baseball cap and huge smile, his charisma was contagious. John seemed to not only make friends with everyone that passed by, but turned them into passionate philatelists, if they weren't already.

"Some people like fishing, some like drinking in bars, I love stamps," he laughed. "I liked the first stamp I ever saw and when I die they're going to have a little stamp engraved on my stone: He loves stamp!"

John spent each of the four days of the centennial event surrounded by large boxes, full of approximately 3,000 old letters each, sorting through the contents for new gems to add to his precious collection.

"The idea is to collect as many letters from different parts of the world sent to New York," he explained, adding how the collection he's amassed- though far from being complete- would fill an entire average-sized room, floor to ceiling.

"My grandmother passed on her collection to me when I was six. I have three sons; hopefully one of them will pick up the stamp collecting and it goes down the line," he said.

Stamps are important part of a nation's history. From the first modern stamp, Britain's "Penny Black" that came out in May 1849, to the landmark sale of the most expensive stamp in June 2014, the so-called British Guaiana One-Cent Back on Magenta - which went for a whopping $9.5 million, or nearly one billion times more than its original value - people have poured time, money, and love into the activity of collecting them. And philatelists say they still have so much to teach us.

"I would like to consider it as a history lesson," said Mani Gilyard, who was managing the booth of his group ESPER, or the Ebony Society of Philatelic Events and Reflections. It promotes African-American history through the study of stamps.

"One of the things that we like to do is to deal with the youngsters to essentially educate them," he said. "Physicians, activists, any category you can think of, there are African-Americans involved."

There are three main types of stamps: definitive, commemorative, and special, with definitive being the most common and the most affordable. Generally less than an inch square, they're printed in large quantities. New stamp categories are petitioned for and added annually by the Postal Service, typically in consultation with the Citizen's Stamp Advisory Committee. Created in 1957 by the Postmaster General, the committee advises the U.S.P.S. on new stamp designs.

To combat declining revenues, the Postal Service has increasingly focused on commemorative stamps that favor pop culture subjects. The 1993 Elvis stamp was the first pop culture one of its kind, and with more than 500 million copies sold, it remains the Postal Service's top-selling stamp.

Traditional philatelists would prefer that stamps just honor America's achievements. Some even criticized the U.S. Postal Service for unveiling a new limited edition Batman stamp at this year's Comic Con. Similar criticism were made one year ago, when the Postal Service released the Harry Potter stamp collection.

Although stamp sales have dropped in recent years, mirroring a decline in the usage of mail in general - New York's centennial show witnessed robust attendance, and stamp collectors there said business was good.

Said Rosende: "Most of our collectors are adults, but lots of children come into our store that wanna start stamp collecting."

Some New York kids interested in stamps are part of the youth group at the Collector's Club, a renowned historical society of philatelists founded in 1896. Its membership ranks included the likes of Franklin D Roosevelt, an avid philatelist.

"The first time I came a year ago, they gave us free stamps, which was cool," said Justin Yin, a 10-year-old stamp lover.

During the groups' most recent monthly meeting, Yin and a handful of his friends sat around a large mahogany table in the club's historical library, passing around stamps and learning about their history and origins.

"Stamps are just cool," said Yin. "Most of my friends just get the mail and throw it out. They don't realize what it is."

"I like stamps because you're holding something so old, and it's special," he said. "If you break it or lose it, you can't get it back."