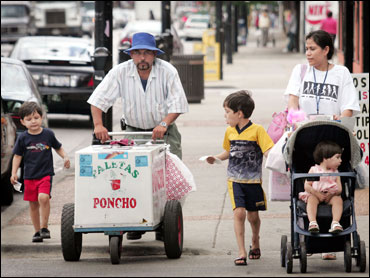 The United States is becoming more diverse, with ethnic and racial minorities topping 100 million for the first time in 2006, according to data from the Census Bureau.

The data suggest about one in three Americans was a minority last year.

The nation was 66.4 percent white, non-Hispanic; 15 percent Hispanic; 13.4 percent black; 5 percent Asian, and 1.5 percent American Indian or native Alaskan. Three-tenths of a percent identified themselves as Hawaiian or other Pacific Islander.

The percentages add up to more than 100, in part because some people identify with more than one race and Hispanics can be of any race.

"To put this into perspective, there are more minorities in this country today than there were people in the United States in 1910, Census Bureau Director Louis Kincannon said. "In fact, the minority population in the U.S. is larger than the total population of all but 11 countries."

California led the way with a minority population of more than 20 million, followed by Texas with just over 12 million.

A year ago, the minority population was 98.3 million.