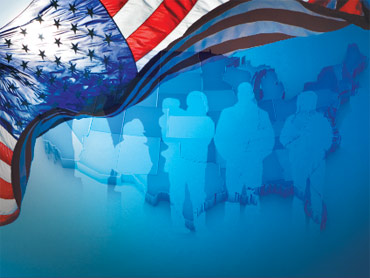 New 2010 census figures, released Thursday, show men are narrowing the female population advantage, primarily in the 65-plus age group. It's a change in the social dynamics of a country in which longevity, widowhood and health care for seniors often have been seen as issues more important to women.

In all, the numbers highlight a nation that is rapidly aging even as Congress debates cuts in Medicare, an issue with ramifications for the growing ranks of older men.

"We know in the past because of women's longer life expectancy, women put more emphasis on health care issues because they lived to an older age and often had to rely on the pensions of their husbands," said Jen'nan G. Read, an associate professor of sociology and global health at Duke University.

"I would expect men to become more aware and involved in health care now that they may be affected in the same way as women," she said.

Over the past decade, the number of men in the U.S. increased by 9.9 percent, faster than the 9.5 percent growth rate for women. As a result, women outnumbered men by just 5.18 million, compared with 2000, when there were 5.3 million more women than men.

The male-female ratio in the U.S. also increased to 96.7 from 96.3 in 2000, reflecting the narrowing of the female advantage in overall population. (A score of 100 signifies equal numbers of men and women; a male-female ratio of 95, for example, would mean there are 95 men for every 100 women in the population.) There hasn't been such a sustained resurgence in the U.S. male population since 1910, when medical advances started to increase women's life expectancies by reducing deaths during pregnancy.

Broken down by subgroups, men were more numerous than women among those 34 and younger as more boys than girls tend to be born.

At age 35 and higher, the female population historically has been the majority as men were more likely to die prematurely from accidents, homicide or risks caused by workplace stress, alcohol, smoking or other factors. By age 85, the number of women typically is more than twice that of men. Life expectancy at birth is 80.8 years on average for women, compared with 75.6 for men.

The latest census figures come amid a graying baby boomer demographic of 78 million people — now between the ages of 46 and 65 and looking ahead to retirement — who will have a major voice in the 2012 elections as federal spending and the spiraling costs of Medicare rise to the forefront.

Last month, the Republican-controlled House approved sweeping changes to Medicare for people younger than 55, but the party has begun to pull back after meeting stiff protests from older voters. On Tuesday, Democrats scored an election upset in a reliably Republican House district in upstate New York after Democrat Kathy Hochul seized on Republican Jane Corwin's embrace of the House proposal to overhaul Medicare.

The census numbers show the 45-plus age group grew 25.6 percent in the U.S. since 2000 as baby boomers shifted into that category. That is compared with 1.4 percent for the under-45 group. Twenty-eight states showed numerical declines in the under-45 population, and all but 129 of the nation's 3,141 counties had increases in median age. Aging was most prominent in the Northeast and Midwest, where there are relatively fewer Hispanic immigrants, who tend to be younger.

"The middle-aging boomers and seniors are at the center of demographic momentum for most of the country, so it's not surprising that health insurance and Social Security are hot-button issues among the electorate," said William H. Frey, a Brookings Institution demographer who analyzed many of the 2010 numbers. "They are issues that could be dominant in the minds of voters for many years to come."

As to the increase in the male population, demographers cited greater incidences of lung cancer and job-related stress factors such as alcoholism among women. They noted a shift first seen in 1990, as women increasingly worked outside the home and after their smoking rates hit a peak in the late 1960s. Recent immigration also played a role as male laborers from Mexico entered the U.S. in search of jobs.

The District of Columbia, Rhode Island, Maryland, Massachusetts and New York had the largest shares of women. On the other end of the scale, Alaska, Wyoming, North Dakota and Nevada had higher male proportions, due partly to mining or construction industries that drew new workers.

Mark Mather, an associate vice president of the Population Reference Bureau, noted that the changing gender ratios already are having a social impact. For instance, the share of women ages 65 to 74 who are widowed dropped last year to 24 percent from 44 percent in 1960. The share of older people living alone who are female also declined, to 71 percent from 75 percent in 2000.

"If current trends continue, men's life expectancy will approach that of women in the next few decades, creating more of a gender balance in the oldest age groups," he said. "This has wide implications for family relationships in old age and caretaking, with more potential partners for older women."