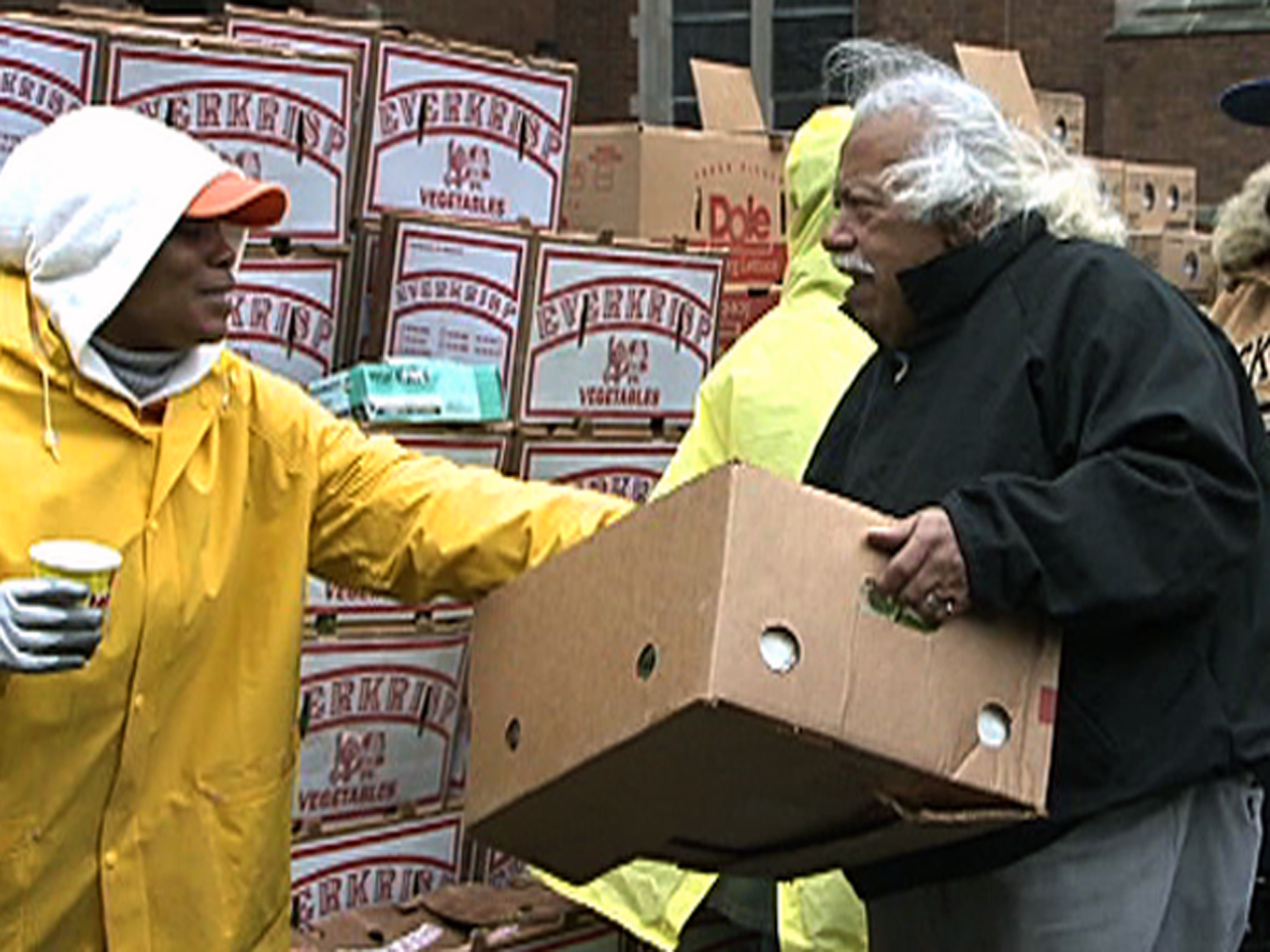 WASHINGTON - Squeezed by rising living costs, a record number of Americans — nearly 1 in 2 — have fallen into poverty or are scraping by on earnings that classify them as low income.

The latest census data depict a middle class that's shrinking as unemployment stays high and the government's safety net frays. The new numbers follow years of stagnating wages for the middle class that have hurt millions of workers and families.

"Safety net programs such as food stamps and tax credits kept poverty from rising even higher in 2010, but for many low-income families with work-related and medical expenses, they are considered too `rich' to qualify," said Sheldon Danziger, a University of Michigan public policy professor who specializes in poverty.

"The reality is that prospects for the poor and the near poor are dismal," he said. "If Congress and the states make further cuts, we can expect the number of poor and low-income families to rise for the next several years."

Video: New data shows poverty at an all-time high
Poverty in America: The faces behind the figures
Most U.S. unemployed no longer receive benefits

Congressional Republicans and Democrats are sparring over legislation that would renew a Social Security payroll tax cut, part of a year-end political showdown over economic priorities that could also trim unemployment benefits, freeze federal pay and reduce entitlement spending.

Robert Rector, a senior research fellow at the conservative Heritage Foundation, questioned whether some people classified as poor or low-income actually suffer material hardship. He said that while safety-net programs have helped many Americans, they have gone too far, citing poor people who live in decent-size homes, drive cars and own wide-screen TVs.

"There's no doubt the recession has thrown a lot of people out of work and incomes have fallen," Rector said. "As we come out of recession, it will be important that these programs promote self-sufficiency rather than dependence and encourage people to look for work."

CBS News correspondent Byron Pitts told the story in November of the Struble family. They are college educated, career-holding members of America's vast middle class. They had a combined annual income of $85,000. But in November of 2009, Todd lost his job, and hasn't had a steady paycheck since. They now have only an estimated $25 in their savings account, perhaps another $100 in their checking. Click on the player at left to see the full story of America's middle class in decline.

Mayors in 29 cities say more than 1 in 4 people needing emergency food assistance did not receive it. Many middle-class Americans are dropping below the low-income threshold — roughly $45,000 for a family of four — because of pay cuts, a forced reduction of work hours or a spouse losing a job. Housing and child-care costs are consuming up to half of a family's income.

States in the South and West had the highest shares of low-income families, including Arizona, New Mexico and South Carolina, which have scaled back or eliminated aid programs for the needy. By raw numbers, such families were most numerous in California and Texas, each with more than 1 million.

The struggling Americans include Zenobia Bechtol, 18, in Austin, Texas, who earns minimum wage as a part-time pizza delivery driver. Bechtol and her 7-month-old baby were recently evicted from their bedbug-infested apartment after her boyfriend, an electrician, lost his job in the sluggish economy.

After an 18-month job search, Bechtol's boyfriend now works as a waiter and the family of three is temporarily living with her mother.

"We're paying my mom $200 a month for rent, and after diapers and formula and gas for work, we barely have enough money to spend," said Bechtol, a high school graduate who wants to go to college. "If it weren't for food stamps and other government money for families who need help, we wouldn't have been able to survive."

Since the housing bubble burst, nearly 4 million American homes have been lost to foreclosure. An estimated 1.6 million children will be homeless at some time during the year - 38 percent more than at the start of the recession. As CBS News correspondent Ben Tracy explains, unemployment has driven some families to the southern California desert, where a barren old WWII training ground in the desert has become a place for many to park their troubled lives. Click on the player at left for the full story of "Slab City".

About 97.3 million Americans fall into a low-income category, commonly defined as those earning between 100 and 199 percent of the poverty level, based on a new supplemental measure by the Census Bureau that is designed to provide a fuller picture of poverty. Together with the 49.1 million who fall below the poverty line and are counted as poor, they number 146.4 million, or 48 percent of the U.S. population. That's up by 4 million from 2009, the earliest numbers for the newly developed poverty measure.

The new measure of poverty takes into account medical, commuting and other living costs. Doing that helped push the number of people below 200 percent of the poverty level up from 104 million, or 1 in 3 Americans, that was officially reported in September.

Broken down by age, children were most likely to be poor or low-income — about 57 percent — followed by seniors over 65. By race and ethnicity, Hispanics topped the list at 73 percent, followed by blacks, Asians and non-Hispanic whites.

Even by traditional measures, many working families are hurting.

Following the recession that began in late 2007, the share of working families who are low income has risen for three straight years to 31.2 percent, or 10.2 million. That proportion is the highest in at least a decade, up from 27 percent in 2002, according to a new analysis by the Working Poor Families Project and the Population Reference Bureau, a nonprofit research group based in Washington.

Among low-income families, about one-third were considered poor while the remainder — 6.9 million — earned income just above the poverty line. Many states phase out eligibility for food stamps, Medicaid, tax credit and other government aid programs for low-income Americans as they approach 200 percent of the poverty level.

The majority of low-income families — 62 percent — spent more than one-third of their earnings on housing, surpassing a common guideline for what is considered affordable. By some census surveys, child-care costs consume close to another one-fifth.

A survey of 29 cities conducted by the U.S. Conference of Mayors being released Thursday points to a gloomy outlook for those on the lower end of the income scale.

Many mayors cited the challenges of meeting increased demands for food assistance, expressing particular concern about possible cuts to federal programs such as food stamps and WIC, which assists low-income pregnant women and mothers. Unemployment led the list of causes of hunger in cities, followed by poverty, low wages and high housing costs.

Across the 29 cities, about 27 percent of people needing emergency food aid did not receive it. Kansas City, Mo., Nashville, Tenn., Sacramento, Calif., and Trenton, N.J., were among the cities that pointed to increases in the cost of food and declining food donations, while Mayor Michael McGinn in Seattle cited an unexpected spike in food requests from immigrants and refugees, particularly from Somalia, Burma and Bhutan.

"People who never thought they would need food are in need of help," said Mayor Sly James of Kansas City, Mo., who co-chairs a mayors' task force on hunger and homelessness.