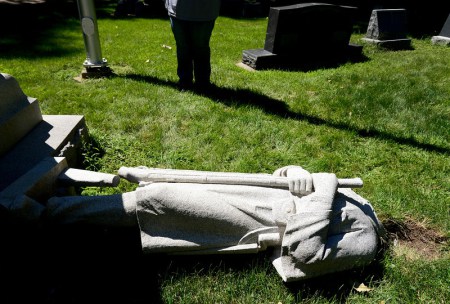 (CBS) LONGMONT, Colo. - Police are looking for whoever damaged more than 100 headstones at a century-old cemetery in Longmont, Colo., CBS Denver reported.

Along with the headstones in the Mountain View Cemetery, a Civil War monument was pushed over and destroyed over the weekend. The statue alone was worth up to $40,000, according to the station.

The case is reportedly tied to a string of vandalism at the cemetery dating back to June 30.

"We know at least two people had climbed up on this monument," cemetery manager Tracey George said. "We have some (footprints) ... where they stood up here to push the (statue) down off the top."

Granite headstones and statues weighing thousands of pounds were knocked over and destroyed. The Civil War statue from 1909 was also decapitated. The vandals left the cemetery with the statue's head, although it was recovered two days later.

"It's devastating ... what, I guess, a group of people can do in a couple of hours," George said.

The cemetery is a landmark that has been a part of Longmont's history for 137 years.

"We're going to be processing the head for any DNA evidence we can collect, we're going to be submitting that to CBI," Cmdr. Jeff Satur with Longmont police told CBS Denver. "They're vandalizing people's final resting spot and that just never sits well with the community."

"They're not only doing damage to the cemetery, they're damaging memories for families," cemetery manager George said.

The suspects could be facing serious felony charges. A private resident has decided to offer a $1,000 reward for any information leading to an arrest make the total reward at $3,000.

Photo caption: Monday, Aug. 12, 2013, at Mountain View Cemetery in Longmont. 106 headstones were knocked damaged by vandals over the weekend.