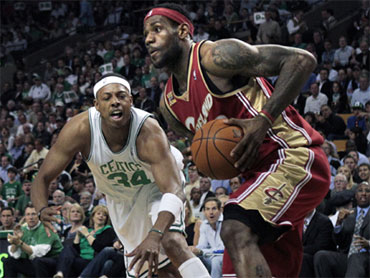 The Boston Celtics advanced to the Eastern Conference finals with a 94-85 victory over Cleveland in Game 6 on Thursday night, sending LeBron James and the Cavaliers into an early offseason destined to define the future of the franchise - and the rest of the NBA, too.

The LeBron watch began at 10:53 p.m., when Rajon Rondo dribbled out the last 14 seconds and the Celtics began celebrating. James is eligible to opt out of his contract this summer, a move that would make the two-time MVP - and zero-time NBA champion - a free agent and set off a scramble for his services from New York to Miami to Los Angeles and, of course, back in Cleveland.

Kevin Garnett scored 22 points and added 12 rebounds, and Rondo had 21 points and 12 assists for Boston, which will open the conference finals in Orlando on Sunday. The Magic are 8-0 in the playoffs after sweeping the Charlotte Bobcats and the Atlanta Hawks in the opening rounds.

"Well we know their team is fueled by one guy," Garnett said. "If we could somehow, some way, control the supporting cast we had a chance"

James had a triple-double, scoring 27 points and had 10 assists and a career playoff-high 19 rebounds. He also had nine turnovers.

"I just told him, 'Keep your head up, man. I've been there,"' said Garnett, who toiled as a star without a title in Minnesota for more than a decade before winning one with Boston in 2008. "You have a very, very, very bright future. Continue to work and make decisions based on you and your family. Best advice I can give him."

Mo Williams scored 20 of his 22 points in the first half for the Cavaliers, who won an NBA-best 61 games in the regular season to earn a home-court advantage they never got to use.

Paul Pierce scored 11 of his 13 points in the second half after playing just nine minutes - and shooting 1-for-5 - in the first with foul trouble. The Celtics had missed their first eight 3-point attempts when Pierce hit a 3 that gave them a 65-58 lead with 4:06 left in the third.

It was 67-61 when Rasheed Wallace hit a 3-pointer, and then Ray Allen stole James' pass and got the ball to Pierce for another 3 that completed a 16-4 run.

James hadn't made an outside shot before hitting back-to-back 3-pointers to cut it to four points, 78-74, early in the fourth quarter. But Rondo drove for a layup, then set Pierce up for another 3. Pierce found Wallace for a 3-pointer and then Tony Allen's steal led to a Garnett dunk at the other end that sent the Cavaliers into a timeout to regroup, down 88-74 with 5:53 left in their season.

It was the second straight year Cleveland has finished the regular-season with the No. 1 overall seed, and the second in a row that they have failed to get out of the East. Last year, they lost to Orlando in the conference finals, an exit that left James so shaken he skulked off the court without shaking hands.

This year, he might not stop until he finds himself in a new city.

The sold-out Boston crowd taunted his every free throw with a chant of "New York Knicks!" and fans wore Knicks jerseys with his name on them. The only "M-V-P!" cheers were not for James, who was the league's best player in the regular season, but for Rondo, who was the best player in this series.

NOTES: The hottest T-shirt in the stands was a takeoff of the famous Barack Obama campaign poster with James' image and the caption, "Nope." ... Wallace was called for a technical foul in the second quarter. He had 14 in the regular season, but it was his first of the playoffs. ... Cleveland is the only team to advance to the Eastern Conference semifinals in each of the last five years.