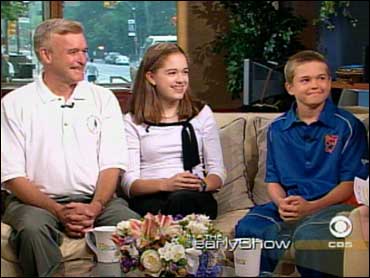 When two Massachusetts siblings read about a soldier in Iraq who couldn't afford to keep in touch with loved ones back home, they decided to start a fund to pay his cell phone bill.

That was two months ago. Since then, Brittany and Robbie Bergquist have raised over $130,000 to help as many soldiers as they can stay connected.

Brittany tells The Early Show co-anchor Hannah Storm the idea came after hearing soldier Brian Fletcher's story. Back then, he was stationed in Iraq. Now he is in Kuwait.

"While he was in Iraq, he worked up a $7,624 cell phone bill," says Brittany. "When we heard about that, we felt so bad, we ran upstairs and got the money we had saved up and brought it to our parents and told them we had to send this to Brian to help him pay his bill, because we thought it was another thing that he had to worry about. And he didn't have to deal with that type of stress."

Her father Bob Bergquist notes, "We found out from a cell phone carrier that they're paying $2.99 a minute roaming charges."

The middle-school students from Norwell, Mass., then turned to their friends to raise money for the soldier and others who could not afford to call home. When they went to deposit the money, a sympathetic banker donated $500 dollars to the effort.

Within two months, Brittany and Robbie have organized fundraisers to purchase old cell phones and prepaid calling cards. They have raised more than $130,000 through these events and their Web site, Cell Phones For Soldiers.

Their efforts have been acknowledged by the White House, members of the military, and Jim Kelly, quarterback for the Buffalo Bills. Kelly has also signed on as their celebrity spokesperson.

Army Reservist Capt. Don Williamson's unit was the first to receive phone cards. He is related to the Bergquists and is stationed in Baghdad, Iraq.

"When I gave out the cards, it was incredible to see what their reaction to it was," says Williamson. "One of the examples I have is I recently met a soldier in our maintenance garage from Hawaii. He's been married for only a couple years and has a 3-month-old son and calls home every day. We have a phone bank here. It costs 39 cents a minute. At that rate, he's spending $350 to $500 a month and only gets paid $1,500 a month. When I told him I'm going to give him phone cards - he's going to be able to hopefully call home for free - he was speechless."

To their cousins, he says how proud he is of their efforts.

Trying not to get emotional he adds, "Its just incredible thing to see the heart that they have for their soldiers and they recognize the fact that cell phone card or a phone card is more than just a phone card. It's being able to talk to their loved ones back home."