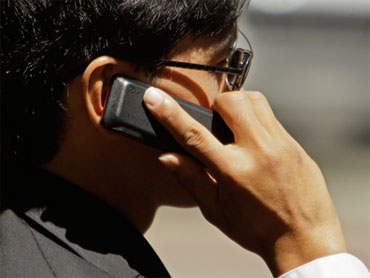 Cell phones are more powerful than ever, with innovations and features being unveiled constantly.

But, reports CBS News Business and Economics Correspondent Rebecca Jarvis, all that convenience could come with a cost.

A recent survey shows 85 percent of American adults own cell phones, and many use them for much more than just making calls -- for e-mail, instant messaging, Web access, shopping online, even banking, bill-paying and much more.

But can cell phone users really be sure all their personal information is secure?

Michael Gregg is what's known as a "white hat" hacker. He helps companies and consumers keep the valuable information safe. He says every phone operating system has been hacked.

"The real concern," he told Jarvis, "is you start to have banking information, personal information, other sorts of data on the cell phone. … The hackers are always really one step ahead of everyone else, because they're going where the money is. … Whatever you're saying or doing may not be as private as you think."

It is, says Jarvis, happening across the country: identity theft, spying by cell phone -- even major banks have been victimized. And no one is immune to hacving info snatched.

Using just a laptop and free WiFi access point, Gregg demonstrated how a hacker could spy on the iPhone of someone sitting on a park bench.

When he visited Fandango to buy movie tickets, the site popped up on Gregg's screen. A hacker could use the trick to steal the iPhone user's credit card information.

Another hacker's trick is referred to as caller ID spoofing - making it appear to a cell phone user that a call is from someone he or she knows, when it's really from a hacker. "That," Gregg explained to Jarvis, "could be used, for example, for me to make a call to you and call from your bank and ask for information, ask for personal information, a PIN number and other types of data.

Hackers can also easily break into and listen to voicemails left on some cell phones, especially if they're not protected by a password.

The bottom line: You can't afford to take cell phone security for granted.

When CBS News spoke to The Wireless Association, it acknowledged that, as devices have become more data-intensive, security is a challenge. But the organization says the industry is constantly improving security features on wireless networks and devices, to try to keep consumers safe.

• Set up a voicemail password, to make it harder for someone to break in.

• If you're going to shop or bank online, do it over a secure network: Free WiFi access points are much riskier.

• Don't download apps from unknown sources. Some apps have been accused of gathering personal info.

If you think you've been hacked, says Jarvis, contact the wireless carrier, bank or credit card company and let them know your info may have been compromised. Don't contact them by e-mail or use the hacked phone to do that; use a different phone or visit in person.

Does birth order make or break a relationship?