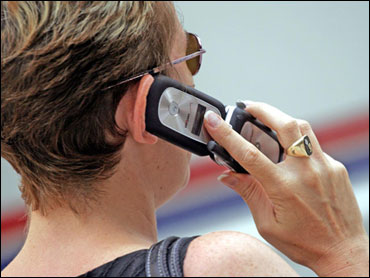 Today, 217 million Americans -- about 71 percent of the country's population -- have a cell phone.

But are they safe?

A new study showing changes in the brains of cell phone users is fueling concerns about the effect of those phones on people's health. CBS News Medical Correspondent Dr. Jennifer Ashton explained the National Institutes of Health study, conducted on 47 people during a 50-minute call, has garnered some interesting results on brain activity.

She explained, "What (researchers) did was ask people to hold a cell phone up to the right and left sides of their head in the 'on' and 'off' positions respectively, and then, using a PET (positron emission tomography) scan to measure brain activity, known as glucose metabolism, they found that when the phone was in the 'on' position, they actually found increase in activity, shown on the PET scan in red."

Co-anchor Erica Hill asked, "But what's the significance of that increase in (brain) activity?"

Ashton responded, "Well, that's the question. And they don't know the answer, Erica. They don't know whether these are potentially harmful effects, or, believe it or not, whether they could actually be positive or good effects. And the key thing here is that when you look at the effects of a cell phone, you have to understand that it does produce low-level energy, known as electromagnetic radiation -- non-ionizing radiation (which is) not thought to cause any damage in terms of heating. But this study raised questions of, does it do something else? Can it lead to free-radical damages? Can it lead to inflammation? And that's what they're going to be looking at."

Hill pointed out there's long been debate on the potential impact of a cell phone on your health.

"Multiple studies have been done (with) conflicting results," Ashton confirmed. "Most have not shown an increase in the rates of brain tumors or brain cancer. Some have. I think the key thing here is, when you look at something that has been used by so many people ... over the last 15 or so years, the rate of cell phone use has skyrocketed, the rate of brain tumors and brain cancer has largely remained unchanged, telling people there's probably not a direct effect."

Ashton continued, "Obviously, things like hands-free use -- while it doesn't drop the energy transition risk to zero -- it will lower it. And obviously, most states have a mandate law that prevents you from driving with a cell phone held to your head. So you should be using those things anyway. And lastly, you don't want to sleep with a cell phone under your pillow or directly next to your bed. Very commonsense things."

Hill noted, "And it doesn't matter, this applies to all cell phones, not just smartphones or a clam shell phones. Seventy-one percent of the population -- there are a lot of different phones people use."

Ashton said, "It did have an increase in brain activity, about seven percent. That is well below the increase in the brain activity that we see every day with things just like visual stimulation. So an area of ongoing research. We have not heard the end of this."