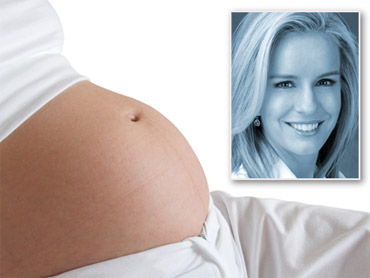 Celine Dion, 42, and her husband have announced they are expecting twins.

But, observes CBS News Medical Correspondent Dr. Jennifer Ashton, despite the impression such news might give, successful pregnancies in women older than 40 is still comparatively rare.

On "The Early Show" Monday, Ashton, an ob-gyn, told co-anchor Maggie Rodriguez, who herself is pregnant, "We're seeing this more and more among celebrities, and it appears that 40 would be the new 30 when you're talking about pregnancy and fertility. Not exactly the case.

"When you look at the numbers in terms of women and their fertility, there is no question it declines as they get older. We're meant to reproduce in our early 20s. So, when you look at women in the 20-to-24 age group, only seven percent will be infertile. When you go up over 40, that number approaches 30 percent. That's because the quality of their eggs goes down and the number of their eggs goes down."

Outside intervention to help start such pregnancies is "pretty common," Ashton says. "Actually, there are 4 million births in the U.S. every year, approximately, and the estimates are that one percent of them, so that's about 40,000 babies, were conceived using what's called assisted reproductive technology. So, not totally mainstream, but very, very common.

"There's a whole spectrum of what we call assisted reproductive technology," Ashton continued, "and it could be anything from in-vitro fertilization, which could be due to anything from sperm problems or egg problems, and then it could encompass donor egg, donor sperm and, in the most aggressive cases, uterine surrogacy, where you actually have another woman carry that embryo and baby for you."

How often do such pregnancies take hold and get carried to term?

"When you look at ... all cycles using non-frozen embryos, the success rate approaches about 30 percent," Ashton says. "Now, that is heavily dependent on age. The older you get, whether you're using your own egg or not, the success rate of a live birth goes down. Again, just because we're seeing it in the 40s does not mean it's easy."