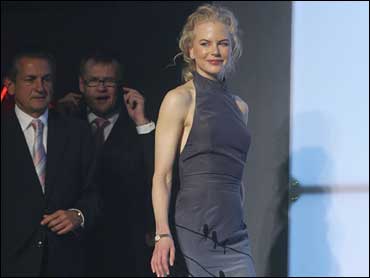 For nearly half a century, talk-show host Larry King has interviewed the famous and the infamous. For his latest book, "Remember Me When I'm Gone," he asked more than 300 celebrities how they would like to be remembered after their death.

Having worked with King during the Goodwill Games in 1990, The Early Show co-anchor Hannah Storm says, for those who do not know King, the reason people open up to him is because he is a kind and generous person.

King says, "I pinch myself every day. I'm just a guy who grew up in Brooklyn who wanted to be a broadcaster, who just wanted to first get into radio and then television. I had no idea beyond that I would go on a channel around the world or know all these people and ask them questions, because that's my favorite thing to do. So all of it is like, I just can't believe it. And if I make it to 2007, I'll be 50 years on the air. You know, next year is 20 years at CNN."

Some of the most memorable answers to the question of how the people he interviewed would like to be remembered:

Donald Trump: "A man of great vision, who fulfilled many of his dreams, loved his family and was loyal to his friends."

Martin Sheen: "What I'd like to be remembered for: For about five minutes."

Could Protein Shakes Harm Your Health?

Patricia Neal: "Show me heaven. I have seen hell."

Arnold Schwarzenegger: "I had fun."

Mike Wallace: "Dear Larry, I can't be more helpful, but I'm not going."

Ted Danson: "Back in a minute."

Liz Smith: "Well, the great Dorothy Parker wanted, 'Excuse my dust!' I would have to change mine to 'Excuse my dirt!'"

Phil Donahue: "Is the caller there?"

Bob Dole: "I demand a recount"

Aaron Spelling: "Stay tuned! I may not be here, but my show was picked up."

He says, "I am, of course, proudest of my kids and madly in love with my wife, Shawn. She was good today - a little joke there, Shawn. Above all, I would like to be remembered as a good broadcaster, who has interviewed from people in history, writers, to Nobel prize winners, saints to sinners. I've talked to them all. I am grateful to the listeners, who have kept me going all these years. I hope 50 years from now, when people talk about Larry King, they'll say, 'He did a hell of an interview.'"

Read an excerpt from "Remember Me When I'm Gone":

Alan Alda is a multi-award-winning actor, writer, and director. He first appeared on film in 1962 in Gone Are the Days. He is perhaps best recognized for his portrayal of wisecracking Army surgeon Benjamin Franklin "Hawkeye" Pierce in the TV series M*A*S*H, which ran from 1972 through 1983.

No, no, my dear ones, do not weep!
There is no cause to grieve.
For I am by his side again,
My dear beloved, Steve.

Jayne Meadows Allen is an Emmy Award-winning actress. She and her late husband, Steve Allen, were married for nearly fifty years and starred in numerous television programs together, including Steve Allen's memorable PBS miniseries, Meeting of Minds.

When I was a young girl I loved to watch Ginger Rogers dance. I would watch her over and over and eventually learned many of her dance steps.

When I went to my first audition, the steps I learned from Ginger were the ones I used. They hired me on the spot.

My advice to anyone who has a desire to be a dancer or be in the movies is to find someone they really admire, watch them and learn from them.

Success will be yours.

June Allyson is an award-winning actress, singer, and dancer. She has appeared in numerous movies including The Stratton Story and The Glenn Miller Story, co-starring James Stewart, as well as The Girl in White and They Only Kill Their Masters. She has recently appeared in various television commercials.

The possible conversations heard at the passing of Ed Asner:

I had no idea that in his later years he wore a bald cap!

He wrote every word that ever came out of his mouth.

He spoke of having learned his cavalry technique under Jeb Stuart sans the cavalier peccadillos of that gentleman--and later applying them to the Red Army Cavalry.

Though he spoke twenty-seven languages, he seldom had occasion to use them, perhaps because ten of them were obscure Chinese dialects.

As a child he knew Etruscan but he forgot it.

From those savants he trusted and occasionally entrusted certain confidences, it might be gathered that his rather lengthy sojourn on earth (if his figures are to be believed) was short in terms of his life and that even more astounding, his life did not commence and will not be terminated on earth. In other words we have what would be called an ET here. Opening the storage locker next to Walt Disney's may reveal that Ed Asner has left the planet. Requiescat Pacem.

Ed Asner is a multiple Emmy Award-winning actor. His portrayal of Lou Grant, head of the WJM newsroom, on The Mary Tyler Moore Show earned him three Emmys during the show's seven-season run. He also received an Emmy for his villainous appearance on the miniseries Roots.

The shell of life is broken and the air of death is breathed,
A cry of being is uttered by the hand of an expertise.
The warmth and quiet gone forever, the fight and toil here.
How much better it would have been for all if he had stayed in there.

For the future holds a tiny fist that grasps and strikes the air,
But never ever wins the war, just slowly loses hair.
We enter naked, whole & pure and forever is our wish,
But we exit thus not quite the same for life is but a swish.

So come ye all to eat my fruit and share with me my lusts,
For it won't be long my brothers, before we turn to dust.

Max Baer Jr. starred as Jethro in the CBS television series The Beverly Hillbillies. He has gone on to write, direct, produce, and star in a wide variety of films, including The Asphalt Cowboy and Hometown USA.

10. He was always late for the party, but when he got there he was a lot of fun.

8. Never underestimate the power of the well read.

7. You can accomplish a lot by being annoying.

6. He was short, but his personality was tall.

5. Check his cell phone, he's probably got it with him.

3. He would like to posthumously thank Christopher Guest for the best time he ever had while filming anything.

2. Contrary to popular belief, Close Encounters of the Third Kind was not loosely based on Bob's life.

1. And the number one thing Bob would like you to remember about him: You can take the boy out of Chicago, but you can't take the Chicago out of the boy.

Bob Balaban is an actor and director who has appeared in such iconic films as Midnight Cowboy and Close Encounters of the Third Kind. He has recently paired up with actor and director Christopher Guest, appearing in two of Guest's acclaimed faux documentaries, Waiting for Guffman and Best in Show.

As I Lay Dialing

Kaye Ballard is an actress and singer. Her first film appearance was in 1957 when she starred in The Girl Most Likely. She also starred in the television sitcom The Mothers-in-Law, produced by Desi Arnaz.

Joanna Barnes is an actress who has appeared in such prominent films as Home Before Dark and Spartacus. In the mid-1970s, she retired from acting to pursue a second career as a novelist.

I thank you, I love you
Please don't mourn for me
We shall all meet again
You just wait and see.

I'm leaving this body
Which has served me well,
To stay in it longer
Might start to be hell.

I've loved living this life
It has been rich and fine,
Now I'm going for a rest
With the truly Divine.

Stephanie Beacham is an actress. Her breakthrough film performance came in 1972 with her portrayal of Miss Jessel in The Nightcomers. She went on to hold starring roles in such prominent television series as Dynasty and Beverly Hills 90210.

Excerpted from "Remember Me When I'm Gone," by Larry King Copyright© 2004 by Larry King. Excerpted by permission of Doubleday, a division of Random House, Inc. All rights reserved. No part of this excerpt may be reproduced or reprinted without permission in writing from the publisher.